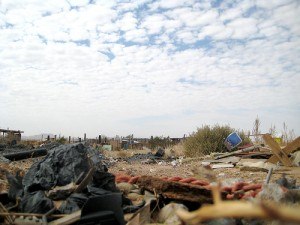 I kept telling myself we were headed to a place where two black eyes  mean you got off easy.   The philanthropic site visit trip to Juarez was off to a rocky start. I  landed in El Paso with eyes blackened from an eye surgery the week  before, wounds that could only be hidden by the sunglasses I kept on  even after dark, so as not to alarm my trip partners and the activists  we were there to meet. Fortunately, in Ciudad Juarez people wear  sunglasses a lot. In this place where identity is liability, where the  windows to the soul are better left shielded, I would fit in just fine.

I am, however, a social justice donor with a family foundation called  Angelica, and a middle-aged American mother of three. I was running  around Juarez, over the protests of everyone who cares anything about  me, with money to fund people and projects based in the city’s drug war- inflamed, violence-ridden streets. In that respect, fitting in was  going to take a lot more than sunglasses.

My husband Jim and I have been running a small scale progressive  granting program in Mexico for years, supporting groups fighting for  economic justice, migrant rights, indigenous rights, women’s rights,  press freedom, fair elections and all of the other rights and liberties  that could build a progressive Mexican future. And then the drug war  exploded.

We went to Juarez as a team: Ted Lewis from Global Exchange; Ana Paula  Hernandez, Angelica’s then Mexico-based program officer; and John  Gibler, author of To Die in Mexico, an excellent book about the drug war; and me. We teamed up to make seed grants to a small portfolio of  border organizations. The four of us were there to see if philanthropy  had any productive role to play to curb the violence, defend the  victims, support what remains of the free press, and to affect the  underlying economic and social inequities that have reaped the  whirlwind.

We would be meeting in the days to come with women’s groups, drug harm  reduction groups, human rights defenders, journalists, activists,  political leaders. We weren’t kidding ourselves. There weren’t many  other small foundations roaming around Juarez trying to be helpful. Who  could blame them? The definition of helpful was up for grabs. What kind  of grant-making strategy might be pursued in a war zone? How can civil  society protect a population when its government can’t or won’t? What  were the dangers to the groups we sought to help? What were the dangers  to us?

The trip started in El Paso, at the book signing of our  colleague and grantee, the journalist Marcela Turati, whose new book  Fuego Cruzado, (Crossing Fire) about the Mexican drug war, just came  out. She was having an event at the University of Texas, El Paso. A  reporter from the magazine Proceso, Marcela just returned from the  mass graves sites discovered in Matamoros, Tamaulipas. She was asked  about her work capturing the stories of the mothers and wives who come  daily to the 40 separate mass burial grounds looking for husbands, fathers, sons. She doesn’t concern herself with which cartel is guilty  of the crimes, Gulf or Zetas. To Marcela, the devils are  interchangeable. Her stories are about the people who are living through  this war, or who are not living through it. I found the stories brave  and moving but I did not want to remember them. There is no place in the  normal human heart to carry stories like that.

Marcela’s after party was in a hip, art-filled home owned by a painter  in an historic old El Paso neighborhood. The small rooms overflowed with  Mexicans and Americans, academics, writers and activists who share a  love of this border zone. The wine flowed festively, but the  conversations were dark.   Felipe Calderon’s government had tried to pass a version of marshal  law (Ley de Seguridad Social) over the Easter holiday when everyone was  busy celebrating Semana Santa. Though the measure was scuttled by some  quick resistance, the threat against the Mexican democracy still looms. The government had also forced a pact among the major media  organizations in the country to restrict coverage of the drug war,  intending to further stem the flow of horrifying and already censored  news. The rich, who can flee, are doing so in droves. Trading partners  are nervously retreating from long range plans. Unable to improve the  country’s actual security, the Mexican government is hell bent on  improving its image.   April 2011 had been the deadliest month for murders since Calderon’s war on drugs began. The numbers are skewed by the discovery of the mass graves – but those bodies notwithstanding, the numbers of murders,  reported and anecdotal, was on an uptick. The official statistics -of  the dead (then 35,000, and at the dawn of 2012 estimated at 47,000) , of  the narcos captured (many), of convictions (few), and of drugs seized -  are never correct . Just that day in Juarez a man was shot by narco commandos one block from the US Mexico border bridge, right near an army  stop. That last detail is not considered a big deal and is lost in the  flow of bigger and bloodier news . A man was executed …one block  from the bridge to Texas.

Everyone at the party was also discussing the latest citizen’s  resistance movement, centered in the town Cuernavaca, organized by the  Mexican poet Javier Sicilia, whose son was murdered by drug gangs. “All  men are not poets, but every child is a poem” was a rallying cry.  Sicilia’s call to national action and organization of a major march to  Mexico City was suffused with rage, poetry and grief – for his son and  his country. He was calling for an end to the impunity that is the  Mexican justice system, for the army to selectively and carefully stand  down, for an end to the drug war as it is being fought by corrupt policy  and military. He called for justice, for Mexican renewal, for peace.  Opinion leaders had begun talking about a tipping point, the crisis  opening up an opportunity for social change and drug policy reform.

As moving as Sicilia’s rise to the public stage has been, the crowd at  Marcela’s after party wasn’t sanguine. They had seen the promise of  Mexican renewal turn to Mexican dust too many times to count.

It was nearing the bewitching hour when my companions and I left safe,  sleepy El Paso for the black menacing streets of Juarez, tooling our  rented white SUV onto the empty boulevards. Patrols of Federal police  gunned trucks through the streets, their uniformed and masked occupants  holding automatic weapons casually, pointed generally in the direction  of the cars surrounding them.

The streets were lined with hollowed- out buildings and dead  landscaping. Every few blocks we would pass something almost  hallucinatory, such as: An open Applebees, lights on, cars in the parking lot, a few families inside. In Juarez there are Walmart,  Starbucks and Wendy’s. There are commercial Maquiladora “Green Zones”,  factory fortresses making cars, toys and appliances. There are  150,000 abandoned houses and vast urban prairies where you should never  go. In this post-modern dystopia, a traveler ventures from paradox to  paradox, and on each block a vignette of normal life will play out in  the theater of the apocalypse.

We arrived at the Hotel Lucerna, one of the city’s nicest hotels, and  went to sleep in rooms overlooking the pool and walled garden. Sirens  wailed through the night. Tomorrow would be a day of extreme  philanthropy, and we all needed the sleep.