“PODER stands for People Organizing to Demand Environmental and Economic Rights. And we have our name because in spanish, PODER means power,” says Antonio Diaz, long time co-director of the Tides social venture that has been with us since 1992. PODER‘s mission is to organize with Latino immigrant families and youth in San Francisco to put into action people-powered solutions that are locally based, community led, and environmentally just.

Since 1992, Tides has partnered with PODER on services and support to continually scale their impact. Tides spoke with longtime PODER leaders, organizers, and members to hear about the impact PODER has had in their lives and communities. See a slice of those stories in this video about PODER and Tides:

A recent win for PODER is In Chan Kajaal park in San Francisco. Mayan for “My Little Town,” the name pays homage to Mayan-speaking immigrants from the Yucatan region of Mexico, who are a long-time community in the Mission district, where the park is.

“It’s an example of what community can get done together. It’s an example that community can be their own designers, can be their own planners, and create something beautiful,” says Marilyn Duran, longtime PODER member and now a PODER organizer. “17 years, we organized, we brought people together, we brought families and residents together to say we want a park in this neighborhood and we want to make sure that we have access to it and we have access to healthy food, along with an ability to share in our culture.”

The lot where In Chan Kajaal now sits, at the corner of 17th and Folsom, sat empty in the middle of one of the densest neighborhoods in the city with the least green space, the Mission district. PODER worked strategically with a coalition of partners to make their vision a reality, including San Francisco Recreation and Parks and the Mission Economic Development Agency. Their efforts spurred a $5.2 million project to transform this parking lot into what is now a vibrant meeting ground. And it doesn’t end there. The neighboring parking lot at 2060 Folsom is going to be turned into affordable housing with 127 apartments for families and transitional-age youth, with a design that offers opportunities for community-building among residents, including In Chan Kaajal as its porch. This gives lower-income families and youth another way to stay in the Mission and in San Francisco. One day PODER will move its offices into the building as well. 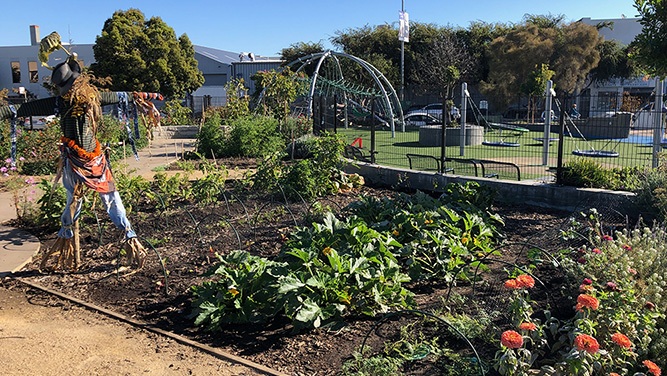 In Chan Kajaal Park and Garden, a result of years of organizing and coalition building by PODER

In Chan Kajaal is just one example of many places and programs in San Francisco created from PODER’s advocacy, as well as the ingenuity to cross boundaries to collaborate with the city and other institutions—including Parque Niños Unidos, Hummingbird Farm, Juan Piffaré Plaza, and Bicis del Pueblo. These physical sites and gatherings mean a lot to immigrant communities, as does PODER itself. “A lot of times people don’t feel like they have a space of refuge, a place where they can really thrive in,” said Edgar Molina, a PODER organizer who started out in PODER’s Common Roots Youth Program, and who moved to the United States from Mexico when he was just four years old. “You come into a foreign land and you don’t really know anybody. You don’t have any resources. You don’t have any friends. You don’t have any family. You don’t have support systems. So PODER becomes all those things.”

If change is going to be transformative change, people most impacted need to be engaged and involved and then in the leadership of addressing those issues.

PODER’s sustainable success is directly linked to its commitment to grassroots organizing. “If change is going to be transformative change,” says Antonio, “people most impacted need to be engaged and involved and then in the leadership of addressing those issues.” PODER empowers the Latino immigrant community in San Francisco to advocate for themselves, to be sure they have the tools they need to survive and thrive. This strategy takes deep commitment, and the capacity to focus on those people-powered solutions. Working with Tides has allowed PODER to maintain that focus.

“Partnering with Tides allows PODER to have a bigger impact in the work that we do. We’re able to focus on the transformational work: the day to day, people to people, policy work that we’re engaged in, the advocacy work that we’re engaged with,” says Oscar Grande, a lead community organizer who has been with PODER for over 20 years. “Through the relationship with Tides and the support Tides has given us, we’re able to still be a nimble, kind of grassroots organization even after 25 years.”

PODER is just one of 150 social ventures working with Tides every day to accelerate the pace of social change. Donate to PODER this giving season.