Shifting from solidarity to joint struggle

Westood next to Dr. Cornell West when the announcement was made. After threatening the Oceti Sakowin camp with eviction, the Army Corp of Engineers experienced a change of heart and denied the easement for the Dakota Access Pipeline (“DAPL”). Despite how frosty and cold it was in Standing Rock, where the weather had dipped to single digits, people cheered and an indigenous water protector walked around tying bands around our biceps, representing the Four Directions of the Medicine Wheel. The sun shone as bright as our hearts. 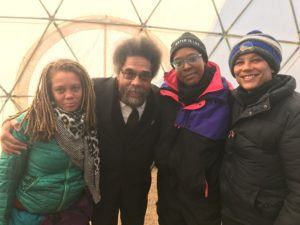 With Dr. Cornell West just before we found out the easement was denied.

Even though Energy Transfer Partners ignored the announcement and continued with its 1,172-mile, 30-inch diameter pipeline that will connect North Dakota to Illinois — drilling through the drinking water, sacred sites, and traditional lands of the Standing Rock Sioux Tribe — we all felt a sense of accomplishment, celebration, and victory in that moment. 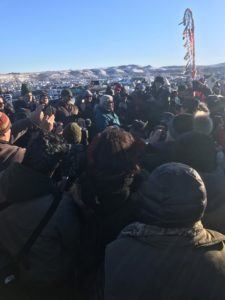 We had complete faith that the #NoDAPL movement, which has grown into an inspiring demonstration of intersectional people’s power, would win.

This is a beautiful coalescence of indigenous resistance, with over 350 Indian tribes coming together for the first time in history, to stop a dangerous oil-filled pipeline in its route, and to bravely stand up against extractive capitalism, confronting decades of settler colonialism. And thousands of people, young and old, all ethnicities and faiths, continue to arrive, joining the fight at the intersection of race and capitalism, recognizing that this drilling is about the exploitation of indigenous people, culture, resources, and land — it’s not about progress, or resources, or any of the other misleading messages Energy Transfer Partners spouts in justification of its pillaging.

Like so many others, I went to Standing Rock because of the incredibly violent standoff between water protectors and the Morton County Police that occurred in November. After seeing water protectors being water cannoned, tear gassed, and shot with rubber bullets in freezing temperatures, I was angry and wanted to show up in solidarity. 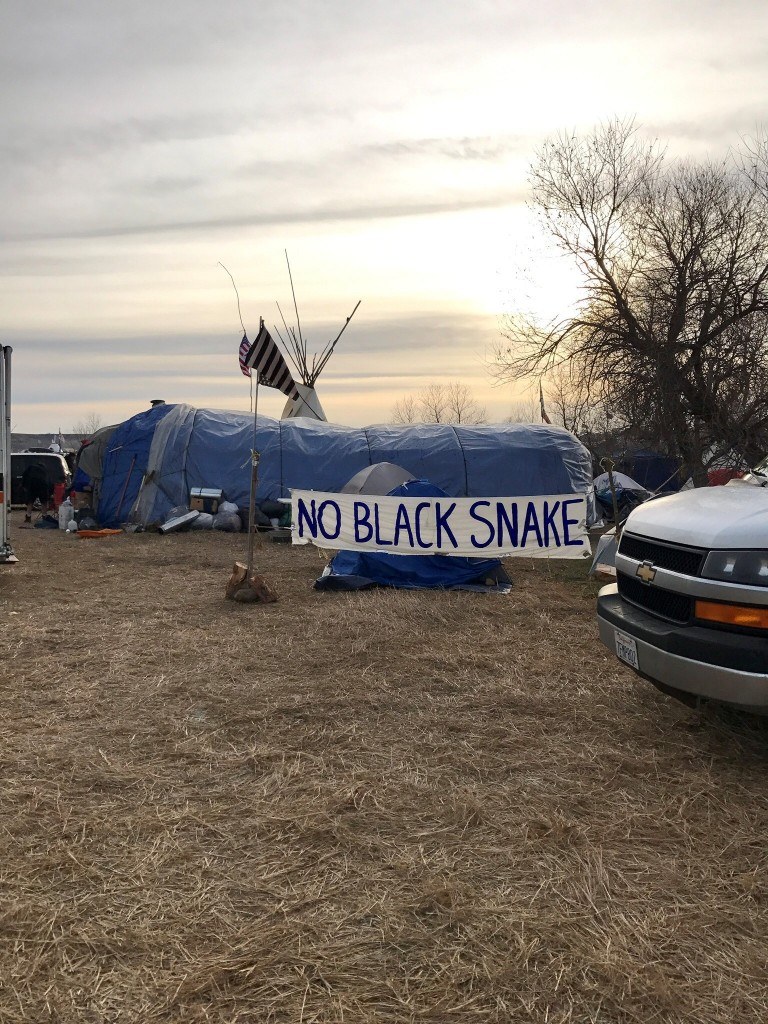 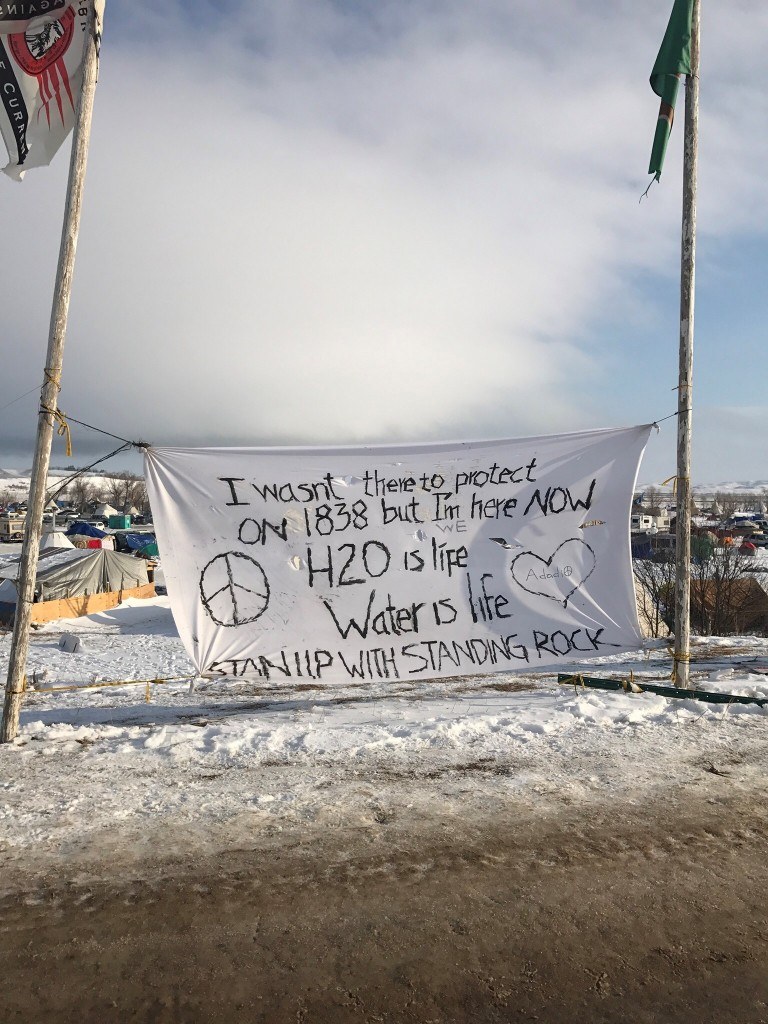 A supportive banner in Flag Row, at Oceti Sakowin.

Oceti Sakowin is a prayer-based camp and the elders asked that all actions be rooted in prayer. We joined a powerful women-led procession to the bridge where the violent standoff occurred. Our peaceful silence was met with a militarized police presence, including tanks and riot gear.

While there, a friend helped me realize how I could best use my own knowledge and resources to help this movement fight against the violent forces directed at them.

I worked with the Water Protector Legal Collective, a division of the National Lawyers Guild, collecting Plaintiff’s Statements to use in their class action lawsuit against Morton County Police for their violence which resulted in numerous injuries. That lawsuit was filed earlier this month.

As a queer, gender nonconforming black woman, I felt at home in the indigenous-led Two-Spirit Nation camp, a camp within Oceti Sakowin. I organized the food pantry, and helped with other camp duties like taking out trash and compost, removing greywater, and shoveling snow. It wasn’t glamorous. I went over a week before showering at the nearby casino, and I didn’t run a comb through my hair for the entire two and a half weeks I was there. No one cared. 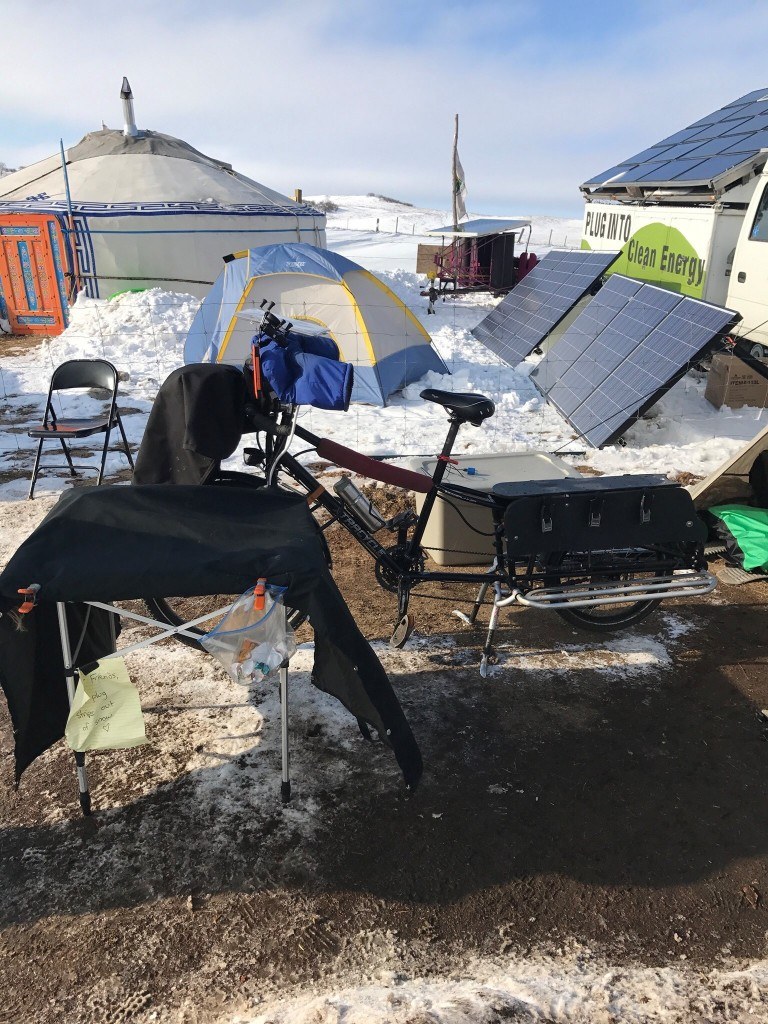 Made by Rock the Bike from Oakland, CA, this dynamic pedal-operated generator provided power to charge cell phones.

Returning from Standing Rock was a difficult cultural readjustment. Oceti Sakowin Camp with its culture of community, abundance, and collective purpose felt rooted in love. Coming home, I was thrust right back into my noisy, nonstop, sensory-overloaded, hustle-bustle, technology-driven, make-money-spend-money, sink-or-swim, everyone-wants-to-know-about-my-experience-right-now life. I realized I barely knew any of my neighbors, and I certainly had never considered helping them build a new roof for their home, or organize their pantry.

But at Oceti Sakowin, I met all kinds of people in the Two-Spirit camp, and across the larger camp, in kitchen lines and in decolonization meetings. Someone was always willing and ready to help, to talk to you, or provide you with something you need. Even in the extraordinarily uncomfortable circumstances that we were in. We came together to cook meals, build roofs and floors, organize, pray, eat, connect, learn, and be. There was an intentionality behind interactions, an authenticity in caring for others. And there was intentional space for things not to be ok.

Capitalist modes of value based on productivity weren’t present. We were all a team. I miss the connectivity and togetherness, and genuine selflessness.

Refreshingly reciprocal, I heard more than once someone utter in amazement, “This is the future!” 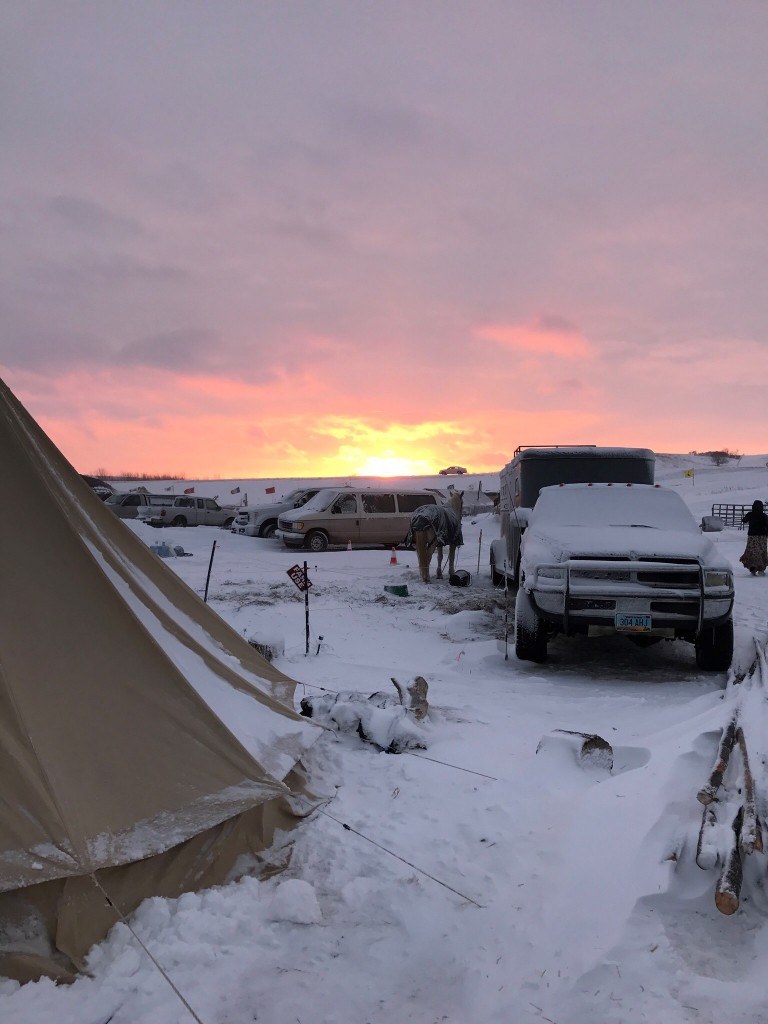 A couple of days after returning, I found myself in the Powell BART station in downtown San Francisco. As I walked down the corridor leading from the escalator to the train entrance, I saw people, homeless, downtrodden, without; and I watched so many people, including myself, just passing them by. Aside from the occasional recognition, head nod, or doling out of change and restaurant leftovers when a particular person’s gaze or voice can break through the facade to my heart, that’s how I’ve been socialized to act. Dozens upon dozens, hundreds upon hundreds, thousands upon thousands of people passing right by each other. Every day. Life in that moment felt so impersonal and disconnected.

I wished there was a plug I could pull out of the wall to slow things down. To momentarily put a clog in the capitalist wheel that drives us and motivates us, that is our Sacred Fire.

In Standing Rock, I experienced a personal and social shift. I realized I could slow down, be more intentional about building community, not only in my close-knit circles, but in my neighborhood and larger community. And I’m shifting from a solidarity mindset to one of joint struggle with the water protectors of Standing Rock. 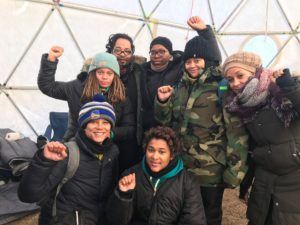 I want to share seven things I learned while in Standing Rock of ways that if you so choose, you can be in joint struggle too:

Ultimately, show up in whatever way feels best for you. Add your ideas in the comments section below.

Kathryn Snyder is Senior Advisor at Tides and The Advocacy Fund, the 501c4 of Tides. Kathryn is also a member of the California State Bar and graduated with a Juris Doctor from University of San Diego School of Law where she was a member of USD Law’s nationally ranked Mock Trial team, President of the Black Law Students Association, and co-founder of USD Law’s Diversity Committee. Kathryn served on the Board of Directors for the San Francisco Lesbian, Gay, Bisexual, Transgender Community Center, as a CASA (Court-appointed special advocate), and is a member of Black Lives Matter Bay Area and black.seed, a black liberation collective. Prior to law school, Kathryn received a Bachelor of Arts in Sociology, Bachelor of Science in Human Development, and a Minor in Communication from University of California, Davis. Email Kathryn at [email protected].