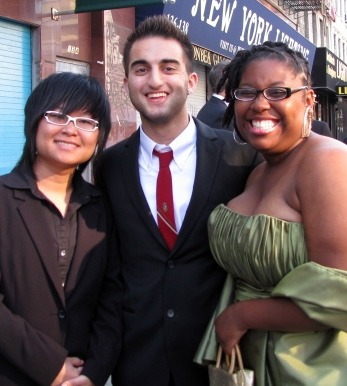 It’s not every day that three LGBTQ youth are handed their Colin Higgins Courage Awards from Kelly Ripa and Mark Consuelos. Phuong Tseng, Daunasia Yancey, and Cyrus Sinai became the first Courage Award recipients to stand on the same stage as Johnny Weir, Daniel Radcliffe, John Larroquette, and Robin Williams! (You can read about them on Tides website or on the Colin Higgins Foundation web site.) Congratulations to the 2011 Courage Award winners!

The three winners accepted their Courage Awards on June 27th at Trevor Live, a night of awareness-raising and celebration in the Big Apple. The atmosphere was electric after the recent legalization of same-sex marriage in New York City.

Cyrus Sinai, one of the three 2011 winners, said, “This award means a lot to me. I have met so many amazing people, and I’ve learned so much.”

Over the last decade, the Colin Higgins Foundation has issued 41 awards (including monetary grants) to activists. The awards honor the support of LGBTQ youth activists on the rise, providing an opportunity to both recognize and reward young leaders who give so much of themselves in service to their communities in spite of their own personal struggles.

Each recipient was chosen from over 400 nominations across the country based on their extensive involvement in their schools, organizations, and communities. The selection process included looking at the “entire profile” to determine this year’s winners.

The Colin Higgins Foundation’s board, which consists of Jim Rogers, Sally Fisher, and Paul Kawata, provides resources and care in an effort to reward youth for bravery in the face of discrimination, intolerance and bigotry based on sexual orientation and/or gender. The Courage Award winners are a testament to how much change can be ignited beginning with the actions of one person.