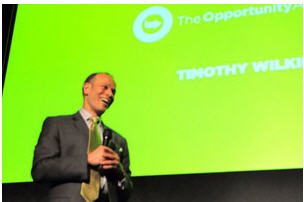 The Opportunity Agenda, a project of Tides Center, celebrated its 5th Anniversary of working toward reinventing The American Dream.  The Paley Center for the Media in New York City was the setting for this celebration of an amazing merger of vision, voice and innovation. Social justice and opportunity for all were the themes for the night; the mood was optimistic and the “Opportunitinis” were refreshing!

From the winners of the Creative Change Awards…

…to the staff and thought-leaders of Opportunity Agenda, the celebration was not only a tribute to their 5+ years of hard work and planning, but a truly inspiring look at what the future can hold when people like Alan Jenkins and his staff and contributors are in charge.

Rha Goddess’ performance art was especially moving, as she portrayed different people affected by the various inequities and injustices that can befall those with the least voice in our society.  The written word cannot truly convey the impact and emotion of her performance:

Between the Master of Ceremonies, Carlos Watson, to OA’s Executive Director Alan Jenkins, to various presenters, awardees and others involved in the celebration, it is evident that Harvard has not only given us the prevalent Social Network of our time, but also the beginnings of a pre-eminent Social Justice Network – led by The Opportunity Agenda.

If contributing in an almost invisible way to the success of an organization such as Opportunity Agenda is a reward in itself; to be mentioned by name in the program of such an impressive event as their 5th Anniversary Celebration is an unexpected compliment.  Yvette Diaz, Judi Seibel and I, along with everyone at Tides are grateful for the recognition.