MPP and its many allies have been working in partnership for over a decade to promote international negotiations leading to a legally binding treaty on mercury — which now is in the works and will likely be signed in 2013. MPP currently co-coordinates an international coalition of over 80 groups from more than 40 countries.

Project Director Michael Bender writes, “…without the backup support we have received from Tides, we couldn’t have done all we have done over the years.” Tides is proud to support the operations of this project.

This original article first appeared in the Garfield Foundation newsletter. 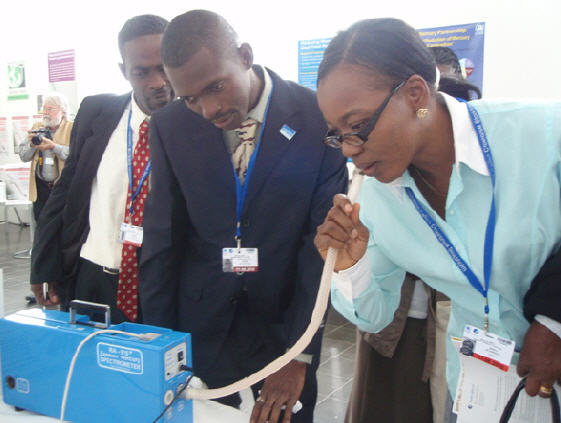 The Lumex machine being used during INC sessions as part of the ‘Say …aaaHg!’ initiative to measure mercury levels coming mainly from dental amalgams.

The European Environmental Bureau (EEB), in collaboration with the Mercury Policy Project (MPP), started the Zero Mercury Campaign in 2004 to virtually eliminate emissions of mercury from all human activities at the European Union (EU) level and globally. Since then, EEB and MPP launched and co-lead the Zero Mercury Working Group (ZMWG), an international NGO coalition comprised of more than 90 nongovernmental organizations (NGOs) from over 45 countries around the world.

In Europe, EEB provided input into the development and implementation of the EU Mercury Strategy adopted in January 2005. The EU Mercury Strategy includes: restrictions on the sale of mercury measuring devices; an EU mercury export ban; new rules on safe storage; and, measures to reduce mercury emissions, supply and demand; and consumer awareness programs to protect against exposure to mercury. However, it fails to comprehensively address mercury emissions caused by the chlorine industry – one of the largest users of mercury in the EU, with over 35 plants still in operation that emit an estimated five tons of mercury emissions annually.