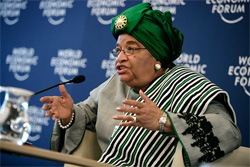 On October 7, three women – Ellen Johnson Sirleaf, Leymah Gbowee and Tawakkul Karman – were awarded the Nobel Peace Prize for 2011 “for their non-violent struggle for the safety of women and for women’s rights to full participation in peace-building work.” The Prize is both a recognition of the important work of the women, as well as an acknowledgment of the increasing role of and need for women in leadership and democracy.

In 2005, Liberian president Ellen Johnson Sirleaf became the first woman to win a free presidential election in Africa, an event which also recorded the highest female turnout in an African election. Since her inauguration, Sirleaf set up a Truth and Reconciliation Commission to investigate the abuses and atrocities of the country’s civil war, successfully campaigned for billions of dollars of debt relief from several countries, and repaired and strengthened foreign relations. She is a member of the Council of Women World Leaders, a network of current and former women presidents and prime ministers whose mission is to mobilize the highest-level women leaders globally for collective action on issues of critical importance to women.

Leymah Gbowee organized the Women of Liberia Mass Action for Peace, a movement of Christian and Muslim women of Monrovia that was instrumental to ending the Second Liberian Civil War in 2003 and electing Sirleaf. Gbowee has been a long-time advocate for the rights of women and against rape, founded the Women in Peacebuilding Program/West African Network for Peacebuilding (WIPNET/WANEP), and serves as the executive director of the Women Peace and Security Network Africa, based in Ghana. Her work was captured in the 2008 documentary film Pray the Devil Back to Hell, which has been used as an advocacy tool to mobilize women in post-conflict zones.

Tawakkul Karman, the first Arab woman to receive the Prize, organized students and activists against the Saleh government in Yemen during the Arab Spring, part of her longer demonstration efforts that started in 2006. Karman founded Women Journalists Without Chains (WJWC), a group promoting human rights, particularly freedom of opinion and expression and democratic rights.

These women are honored in the same year that UN Women, the United Nations Entity for Gender Equality and the Empowerment of Women, became operational, and in the same month of the 11th anniversary of the UN Security Council adoption of Resolution 1325, which reaffirmed the importance of women in the prevention and resolution of conflicts and stressed the importance of their equal participation and full involvement in all efforts in peace and security.

The accomplishments of Sirleaf, Gbowee and Karman also highlight the urgent and dire state of global female representation. Research estimates that hundreds of millions of girls are missing from the world population, predominantly due to female infanticide, so that there are now fewer women than men (3.38 billion versus 3.41 billion). Additionally, there are only 18 female world leaders, and this year’s laureates are three of only fifteen women who have won the Nobel Peace Prize since it was established in 1901.

Irene Kao is Project Manager in Tides’ Impact and Innovation department, where she develops and coordinates strategic initiatives and partnerships, fundraises, and supports business and product development.  She also serves as Executive Director of Hyphen, an all-volunteer, nonprofit Asian American media organization.

Wakanda World Can We Build Together? A Conversation with Romy Justilien

Something’s About to Change for LGBTQ Youth Organizations