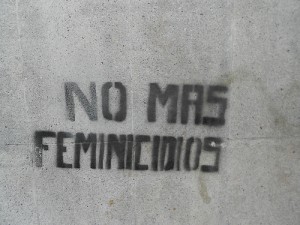 Casa Amiga, a women’s advocacy organization and shelter, is brightly painted, airy, welcoming. Its founder, the late Esther Chavez, was first known for her activism in the period of the feminicidios (feminicides), a period when hundreds of women throughout Juarez disappeared, their bodies turning up in mass graves mutilated beyond recognition. That notorious period of sadistic, sexualized mass murder segued into what Casa Amiga fights against now:  the mundane and relentless epidemic of rape, abuse, torture, murder and disappearance of women and girls.  Some of the violence is random or cartel-related. Some of it is domestic, the consequence of a society where machismo has turned its most ominous and even the worst crimes against women  are met with a shrug.

The staff  gathered around the conference table in a lavender meeting room. They went through their PowerPoint, and talked about their programs of human rights defense and violence prevention, of the psychological and medical services they provide, of their strategies, their finances, their goals. Outside in the central waiting room, women and children spend time before their appointments, surrounded by upbeat art and heartbreaking posters of the victims. Carolina, pictured in the crown of her quinceanero: disappeared. Maria Teresa – thirteen years old and last seen on her way to school – disappeared.

Casa Amiga patches together an annual  budget of $400,000 per year with donations from foundations and some federal Mexican government funded donor organizations.  With that, they run the main operation and secret refuges they have located around the city.  They are the biggest and best women’s organization, and they don’t even come close to servicing the need.

“The problem is that many of the husbands and partners who are perpetrators of the abuse are involved with the cartels that have police protection,” said Casa Amiga’s Executive Director. “We’ve  had soldiers in uniform come to the door demanding access to a woman on behalf of the partner who nearly killed her.”  Because Juarez is the way it is, the arrival of the police at your door is never, ever a good thing.

If there is an untold story of  today’s Mexico, it is the story of the heroism of its women. They are, by and large, the ones who report their missing loved ones, file complaints,  get on lists with human rights defenders, follow cases, pursue rumors, search hospitals and wander morgues.  When cases are closed -and they are usually closed quickly and without justice- it is the women that protest. Some of them paint signs, print flyers, work the system, become full fledged activists.
Lately it is these women activists who are in turn being  targeted, threatened and killed.

In the otherwise cheerful small auditorium of Casa Amiga hangs a painting , a gift by its French artist. It shows a woman, dead and mutilated, hanging on a cross. Depicted behind her are the buildings of Juarez and below her are the graves – the graves of the women lost to the feminicidios. When the painting was delivered to the center, Esther Chavez said it was too graphic and disturbing to be hung in the main public room. It would have to go somewhere else.  The women
of the shelter said no,  it has to hang there because, they said,  ” The painting tells the truth about what is happening to us, what is happening to the women of Juarez.”

Programa Companeros, a harm reduction organization serving the drug user and  sex worker population of Ciudad Juarez, runs its operation out of a nondescript house in an unremarkable  neighborhood. Their key work,
however, is right in the center of Juarez, providing needle exchange and treatment consultation to those who walk  its meanest streets. The red light district, the narcomenudeo (drug marketplace)  and the regular
public market all coexist in El  Centro.  Divided into Centro Norte and Centro Sur, it  is also cartel controlled Plaza  for the Aztecas of La Linea (Juarez Cartel) and their rival gangs in the Sinaloa Cartel of Joaquin “El Chapo”  Guzman.  The city center is also the place Programa Companeros serves the most marginalized, endangered people in Juarez – which  is saying a lot.

Our first stop was a picadero, a heroin shooting gallery, where users inject low grade black tar heroin at 50 pesos a dose .  The first thing to overcome is the smell. You walk past what is unmistakably the latrine and then into a small, ruined courtyard. Beyond that is an interior room, where visitors crowd in.  The bed is strewn with people recently dosed, and past that,  more corners, more darkness. The users see the Programa Companeros workers coming and surround them.  A box of clean needles is proffered – old ones, perhaps infected with HIV or hepatitis, are brought out to be taken away. Condoms are given out. The users  seem happy to see visitors, grateful  for the help and the contact. They want to talk, get their picture taken.

The next stop on their rounds was Mi Fortuna,  the kind of whorehouse where sex workers get 200  pesos per  trick. The  free condoms from the program represents a small windfall that means they can pocket as profit the extra 50 pesos the client has to pay for protected sex. At Mi Fortuna, this is the calculus. The clean needle and free condom makes it a fraction more likely that each encounter will be as safe as such encounters get.  Programa Companeros mission is to reduce the harm of drug use and the sex trade, to prevent AIDS , over-dose, death. To them the arguments  that people should not use drugs, or that needle exchange programs encourage use,  are  ridiculous and immoral. These doctors, case workers, youth organizers, and former users know what they are doing is to improve bad odds and to prolong  short lives – one clean needle, one condom at a time.