Bigelow and Ortiz are each scapegoats, focal points for debates forced by the failures not of individuals, but of entire institutions.

Two tragic events last Friday have prompted heated debate about torture, secrecy, freedom of information, and prosecutors run amok. But are critics assigning blame where due, or merely where convenient?

And is the convenient option too charitable, letting powerful systems of oppression off the hook in favor of scapegoating only the most visible perpetrators?

First (only because it’s an anniversary and was therefore predictable) was the 11th year of military detention at Guantánamo Bay, where prisoners under US control have endured torture–and in some cases, been murdered in custody while their deaths have been presented in public as suicides.

The military detention scheme at Guantánamo has existed for over a decade, but the use of torture remains clouded in secrecy.

In the middle of the raging healthcare debate in 2009, the one thing Congress could agree on was giving the Pentagon authority to hide evidence of its own criminal trail. Even though multiple courts ordered our government to release photos and videos held by the Pentagon that document widely implemented torture policies, that substantial body of criminal evidence remains secret to this day.

One of President Obama’s key appointments to the Justice Department was stalled for a year, before being withdrawn, because she committed the heresy of suggesting that DOJ actually enforce the law by prosecuting officials for human rights abuses.

Ultimately, Obama’s decision to resign accountability for torture ensured that discredited warmongers remained in Washington, where they continued their assault on the Constitution. A year ago, they secured a law extending military detention powers into the US, even beyond the Bush administration’s wildest dreams.

What do we know about torture? Apparently, only what Hollywood tells us.

Kathryn Bigelow’s controversial film Zero Dark Thirty supplies the public with plenty of facts (whether real or imagined) to fill the vacuum. Is it a work of fiction? A documentary? A Rorschach test?

Legions have rightly criticized Bigelow’s depiction of torture, lambasting the filmmaker’s careless insinuation that torture was ever useful (which it wasn’t) and reminding moviegoers that even if it was, it would remain illegal. Many have distributed flyers at theaters (like this one that we designed at BORDC) or chosen to boycott her work in awards ceremonies.

But who are the real culprits? Is it Hollywood’s fault that the public remains in the dark?

Three particular figures have gotten off especially easy–first when they committed crimes, again when they left government to return to positions of influence instead of prison cells, and yet again as Bigelow draws fire for depicting their crimes.  Dick Cheney, John Yoo, and Ninth Circuit Judge Jay Bybee are the former officials who authorized torture in the first place, hid their illegal decisions from the American public, and then lobbied to avoid accountability for their universally abhorred crimes.

Bigelow is no hero. But it’s not her fault that the American people don’t have enough facts to recognize her movie as fiction.

Why haven’t reporters been allowed to read the Senate’s 6,000 page, bipartisan report slamming torture? Blame that on the Obama administration. Or better yet, raise your voice and demand that the facts be allowed to speak for themselves. 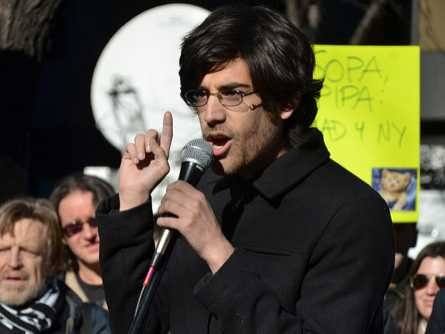 A bona fide genius and dedicated public servant, Aaron did more for the world in his 26 years than most people do in a lifetime. (Full disclosure: my colleagues and I at BORDC often collaborate with Demand Progress, the advocacy organization that Aaron co-founded.)

His supporters have many good reasons for anger at the senseless prosecution that drove Aaron from a world that needs him, and others like him, so desperately. But who most deserves our criticism?

Carmen Ortiz is the prosecutor who relentlessly pursued Aaron for actions that should never have been criminal in the first place. Since when was making academic journals available to the public a grave public danger?

But don’t stop there. Blaming Ortiz for prosecuting Aaron is like blaming Obama for the military-industrial-complex.

What about Ortiz’s colleagues: federal prosecutors who looked the other way when Wall Street bankers crashed our economy and did nothing to hold them accountable? Or the DOJ lawyers who have failed to prosecute even a single official for torture? Or the thousands of state and federal prosecutors who demonize our society’s most vulnerable scofflaws, instead of its most powerful?

My former professor and boss, Larry Lessig, speaks of the need for “shame.” He’s right, but mere shame is not enough.

Aaron’s death should expose the need for accountability among prosecutors. Police around the country are weathering appropriate criticism for racial profiling. But what about prosecutors? Why aren’t prosecutors themselves prosecuted when their records reveal equally clear patterns of profiling?

Bigelow and Ortiz are each scapegoats, focal points for debates forced by the failures not of individuals, but of entire institutions.

Concerned Americans across the country have taken to the streets and the Internet to challenge the misleading depiction of torture promoted by Zero Dark Thirty. But the real criminals aren’t in Hollywood. The real criminals are the former government officials, the current federal judge, and the dozens (if not hundreds) of CIA agents who enabled torture–not a single one of whom has faced prosecution as required by law, in distinction from the discretion prosecutors normally enjoy.

Having promised the most transparent administration in history, the President must let the public read the Senate report to get the real facts. With his second inauguration looming, now is a great time to walk his talk–especially since he has bipartisan cover, and in any case, needs no cooperation from the do-nothing Congress to make it happen.

And while the premature death of a luminary can never be “fixed,” Aaron’s suicide at least exposes a problem that can be: prosecutors should answer for the abuses of a criminal justice system they are principally responsible for tilting against defendants.

Before taking his own life, Aaron sought a plea agreement, only to be rejected by a prosecutor looking to advance her career. Why not jam the courts, by refusing any plea bargains and forcing prosecutors to actually do their jobs? How about educating the public about jury nullification, so that all jurors know their power to tell the government to get lost, even if the jury thinks a defendant committed a crime?

Or how about remembering that the very same court system that prosecuted Aaron not only imprisons a quarter of our planet’s prisoners, but allows an international criminal a lifetime seat on a federal appellate court?

Don’t endure injustice by merely getting angry. Friday’s events point to real problems whose sources we know and can fix. We need not squander our criticism on scapegoats.

The Journey Begins With Trust