Tides invited three long-time San Francisco artists, Jennifer Ewing, Reddy Lieb and Leo Germano, to create work with an environmental theme and they chose “Currents: Visible and Invisible Forces that Move Us” to guide their vision. The China Brotsky Gallery at Thoreau Center in The Presidio, being so close to the Golden Gate Bridge and comprised of a long corridor, informed the way they used the space to tell their stories in various media. Walking down the gallery one can find a story unfolding about our relationship to water and its influence on our lives.

A reception and artist talk will be held on Thursday, October 15th from 5 – 7 pm. The exhibit continues until November 6th in the China Brotsky Gallery.

Jennifer Ewing’s latest installations are statements made of paint, paper bag handles, and cut-up plastic pieces. She has built an 18’ long paper ark that holds the idea of saving what we have for the future and respecting our resources.  Her mural on canvas is about the feeling of water, rain, and walking along the rocky shore. It also invites the viewer to chose how they might imagine entering the water from two different painted realities. Ewing has used cut up plastic water bottles to form a “Sea of Plastic” that has caught some strange creatures in its web.  Her tribute to the original fresh water sources in San Francisco’s Presidio is a painted map that tells a bit of the story of  El Polin Spring, Lobos Creek and Mountain Lake. Thanks to John Bertland of The Presidio Trust, who provided some historic material, Ewing has distilled the story of water use here before 1900.

Reddy Lieb uses text, collage, shredded currency, plastic bottles with messages, and sound to express what is current for her. She is known for her work in glass, but for this show has turned her attention to plastic and text. Lieb has carefully placed her notes and calls for help inside plastic water bottles that hang an arch that spans the gallery; one walks under and around and can reflect on her messages. Different ways that we feel or know currents are also stated in colorful multi-media collages hung in the windows with messages that can be understood, or can leave room for the mystery. Money, also known as currency, needs to be in constant flow or it can end up in a vitrine, as Lieb shows in her sculpture; a worthless display of misplaced values.

Leo Germano’s photos reference what can be seen from the windows of the gallery, the constant flow of laden container ships that are a symbol of consumption and economics. Germano’s digital photography enhances the feeling of these forms that can be very ark-like in appearance.  He shoots from Fort Point, Marin Headlands, Crissy Field, and the periphery of the Bay to capture ships in transit or at the dock. He has been photographing these ships for many years and a selection of these are hung above Ewing’s work as a kind of frieze. The patterns and repetition move the viewer along the gallery bringing an awareness of the continual supply of goods being delivered upon the currents of our Bay. 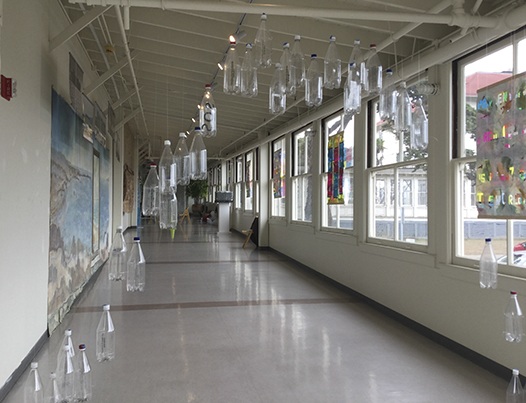 The Key to Solving Our Most Pressing Environmental Issues: Powerful Networks and Collective Action