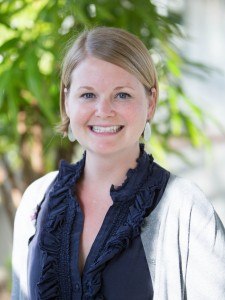 Where are you from?

I’m from Williamsport, Maryland, a bucolic little town in the Appalachian foothills.  In 1794 George Washington paid a visit to evaluate whether Williamsport would be a suitable capital for the new nation. It wasn’t, apparently, and not much has happened there since.

What do you do here at Tides?

My title is Community Catalyzer, and my role is best understood with context: in 1995 Tides signed a long-term lease with the Presidio Trust and invested millions renovating twelve buildings – all part of a decommissioned military hospital and now called the Tides Thoreau Center – into a shared work environment for over seventy nonprofits and social enterprises. Tides also has a vast ecosystem of changemakers: donors, fiscally sponsored projects, grantees, Tides Thoreau Center tenants, and progressive allies around the world. Although they’re all connected to Tides in one way or another, these groups are not necessarily engaging with one another despite the potential to scale their impact by doing so.

My role is to help meaningfully connect those agents of change, mostly through events here at the Thoreau Center, essentially transforming our campus into a physical asset for social change and building Tides’ collective impact.  On a daily basis, I also build relationships with our Presidio neighbors, manage the event space rentals and two on-site art galleries, and facilitate tenant-driven programming, like monthly meditation sessions led by two great onsite organizations, United Religions Initiative and Search Inside Yourself Leadership Institute.

What gets you up in the morning? What issues are you most passionate about?

Exploring the intersection of the built environment and social impact. I was attending school in Chicago as the last of the 1960’s era public housing high-rises were being demolished; it had become apparent that when we fill massive, poorly-designed buildings with people profoundly impacted by poverty, it actually perpetuates economic disadvantages and exacerbates social ills like gangs.  Not unrelated, we also know that students with access to daylit classrooms have less tooth decay, better attendance, and higher test scores, and actually are taller (taller!) than students without full-spectrum light in their classrooms.

It’s inarguable that the bricks and beams that comprise the places in which we live, work, and learn impact the way we feel, the health of our bodies, and even our lifetime earning potential. The irony is that good design is so rarely part of the national discourse when we evaluate how best to serve our most vulnerable communities. My entire career I’ve wrestled with how our country could shift social outcomes through well-designed spaces, particularly for the people who historically have had the least influence (read: none) on the design process for the spaces they use: children, people in publicly-subsidized housing, the homeless, the elderly.

If a building that provided safe haven to victims of domestic violence felt more like a friend’s guest cottage than a shelter, would there be less trauma experienced by the families that stayed there? If a facility that provided community mental health services felt more like a wellness retreat than an aseptic health department, would someone be more likely to seek and remain in treatment? If every charity officed in a building with the same amenities offered by tech firms, like spaces and technology specifically designed to encourage collaboration and creativity, would staff be less likely to burn out? How would that trickle down to the people receiving the charity’s services?

What brought to you Tides?

When I was asked in college what I wanted to do, I always answered, “Save the world.”  Though I’ve retained most of my idealism, my youthful illusion of influence was cringe-worthy; a decade later I unequivocally understand that a single human, even a profoundly effective one, can only make a very small dent in the collective suffering on this planet.  Prior to Tides, I’d worked alongside marginalized communities across the country: youth of color in rural Maryland, adults living with HIV/AIDS in Chicago, working-class families losing their homes in Silicon Valley.  Not a single day did I go home and think, “I solved THAT problem.” Maybe I’d helped a family pay rent for one more month or assist a client to temporarily stabilize her health, but these were temporary and – ultimately infinitesimal – fixes in a world full of complex, interconnected injustices.

I became very discouraged by both the scale and the isolation of my impact; as Bryan Stevenson says, “Hopelessness is the enemy of justice,” and I began seriously considered a sector switch. How could I talk about ameliorating poverty if not also addressing racism in the criminal justice system?  What about the global crises, like human trafficking, climate change, or over-fishing in our oceans?

Enter Tides, which unexpectedly provided a solution to my if-I-can’t-fix-everything-why-fix-anything professional impasse.  We work with organizations who are addressing, quite literally, the most pressing and complex problems on the planet, whether its nation-building in Hawaii to fight for equal political representation of Indigenous peoples or documenting the resettlement of LGBTQ refugees from Africa to places where they can live without persecution.  Of course Tides doesn’t change that I’m a single human with a limited impact, but I no longer feel like a mere spectator to the complex crises that plague people and the planet.