The sun is almost 100 million miles away, yet it makes all life possible. Despite its magnificence, we only use a small fraction of what the sun has to offer. The sun’s energy, from one hour of one day, is greater than what the entire world consumes in a full year. Similarly, democracy provides a bright spot on Earth. Yet, we utilize very little of what that light has to offer.

In 2020, the stakes are especially high – we will face challenges that will test the future of our planet and our democracy. Yet how we overcome these threats will depend upon how we make strategic use of key resources – such as philanthropy, community-based organizations, the labor movement, and environmentalism. California, long having struggled with some of the nation’s greatest inequalities, will provide insights and opportunities for the strategic use of such resources.

California is at the center of several of the nation’s most exciting efforts to advance equity and justice. In particular, the labor movement has led to recent and impressive victories. For example, the passage of California Assembly Bill 5 (AB5) will expand the legal protections for more than one million workers, including gig workers like Uber and Lyft drivers, who had been misclassified as “independent contractors.” In response to the signing of the law, gig companies have launched a $90 million campaign to try to avoid following the new rules.

In the aftermath of the Supreme Court case, Janus v. AFSCME, worker organizing has increased and become more militant. Strikes have rippled throughout the golden state – from teachers standing up for our students and our public educational system, to health care workers fighting for expanded healthcare for all, and public sector workers organizing for our communities and the common good. There has been a rise in community-benefit agreements, living wage ordinances, and the movement for a fifteen dollar an hour minimum wage. Workers in the state are showing up and winning big.

While California has been leading the way on many fronts benefiting low-wage workers, the benefits have not been evenly distributed. The middle regions of the state are home to some of the most toxic and polluting industries – contributing to the highest rates of asthma in children and worst air quality in the nation. The Central Valley, in particular, ranks last or near-last among California’s twelve regions in education, employment, household income, immigrant naturalization, and a number of other key indicators.

The Central Valley is a key area; a lot of workers are being exploited and not a lot of resources are being offered to worker centers. We need to create a process to build networks in these areas to strengthen those workers organizations, to build an infrastructure for worker justice to ease the process.

Paraphrased statement from an interview with Victor Narro.

Race and The Role of Foundations

Race plays a central role in California’s, as well as the nation’s, inequalities. While California became majority-minority in the 1990s, the U.S. is projected to become a majority-minority nation by 2040. Despite large numbers, Black, Indigenous, and people of color experience the highest likelihood of poverty and unemployment, and the majority of low-wage workers are people of color.

By failing to invest in those closest to the problems, those of us in philanthropy have not effectively set up organizations to succeed. California’s giving problem is not just racial, but regional as well. While several of the state’s regions experience dire economic, racial, and environmental inequalities, philanthropy is also unevenly situated across the state. Using the California Foundation Center 2015 data for “all publishable grants, foundation administered programs, program-related investments, and grants to individuals,” there is significant disparity in giving between regions (see figure 1). Following, we focus on regional disparity, with emphasis on the Central Valley. 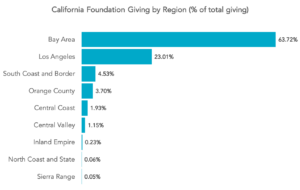 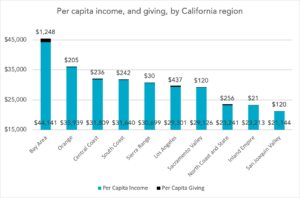 Despite lags in funding, Central Valley workers’ struggles and efforts to overcome adversity have, historically, been instructive and inspiring. It was within a context of extreme disadvantage that the United Farm Workers revolutionized organizing through broad-based partnerships, incorporating community, labor, faith-based and environmental organizations. Such strategies reshaped the fabric of the modern progressive movement, and led to historic victories in large cities among undocumented workers, Latino workers, Black workers, and other marginalized groups.

Investment in worker organizations serving disadvantaged groups – such as low-wage workers, immigrants, and people of color is critical. While racial and geographic disparities have continued to mount across the nation, grassroots organizations have innovated forms of resistance, leading with worker organizing, that should give us hope even where resistance seems dim.

Philanthropy’s role should be to highlight and advance the success of inspiring strategies – particularly when they appear in the least likely places. Through the following four stories, we shine a light on the key Central Valley organizations and leaders continuing to advance worker rights and conditions. These cases show us the great potential of broad-based coalitions rooted in labor and the power they have to advance collective change. It is critical that philanthropy invest in, and learn from, organizations doing such work.

The Civic Capacity Research Initiative (CCRI) at UC Merced is in the process of creating a UC Merced Community and Labor Center – which would be the first of its kind in the region. This past October, CCRI and its co-hosts held the Inaugural Summit on the Central Valley. The summit was themed Building the Valley: Developing Partnerships for Equitable Economic Development, and brought together 65 community-based and labor organizations, mostly from the Central Valley. Attendees created a shared vision for the valley, prioritizing building partnerships for the common good and equitable economic development from a place of “abundance” instead of scarcity.

CCRI’s mission involves conducting research and education to build capacity among the San Joaquin Valley’s community and labor organizations–as research and education can both create policy change and enable grassroots leaders to be strategic about building capacity. Such activities involve policy research, from issues affecting low-wage workers and local residents to a civic training pipeline for UC Merced students. Under the leadership of director Ana Padilla, CCRI is beginning to establish relationships and form partnerships between community, labor, and academe. To date, CCRI has trained five cohorts of undergraduate students, and some have gone on to work as community organizers in the valley. 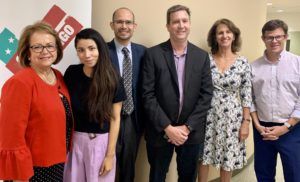 Since its founding in 2012,the Central Valley Partnership (CVP) has since become a hub in the valley, bringing diverse groups to the same table through monthly gatherings with panel speakers drawn from the region’s leading community, labor and environmental groups. Dillon Savory, Executive Director of the Fresno-Madera-Tulare-Kings counties Central Labor Council, AFL-CIO, serves as the chair of the CVP board. Together with Daniel O’Connell, head of the CVP, Savory is helping to create a coalition of organizations, and a network of leaders, dedicated to restoring regional government for the purpose of operating in the public interest.

CVP is experimental, more like a start-up, taking a creative and unconventional approach to building power for working people. CVP serves an essential role as convenor in a space that often has labor and community sitting on different sides on issues. They use tenacity and grit to hold the organization together. Yet, they have played an instrumental role in many of the recent wins for workers. On June 27, 2019, the council unanimously approved a project labor agreement (PLA) to expand the parking and terminal at the Fresno Yosemite International Airport, the first of its kind in Fresno, in two decades. The agreement ensures that a significant percentage of the construction hires will be from the local community and particularly from disadvantaged zip codes.

Líderes Campesinas is a leadership institute and network with over 31 years of groundwork, organizing, and activism. The mission of Líderes Campesinas is to strengthen the leadership of farmworker women and girls so that they can be agents of economic, social, and political change and ensure their human rights. Its staff is composed of victim advocates, outreach specialists, and several organizers who were prior farmworkers.

Líderes is dedicated to spreading awareness and are on the forefront addressing several issues affecting farmworker communities and their families. These issues include, but are not limited to: language and economic barriers, labor conditions, domestic and gender based violence, pesticides, pollution, and unsafe drinking water. Líderes focuses on a hands-on curriculum of activism, education, teatro (theater) and self-care that naturally brings out the inner leader in farmworker women who have been historically marginalized and continue to be today.

Líderes is currently engaged in an ambitious Census project. While census experts project a high rate of immigrant non-response to the 2020 Census, Líderes is engaged in Census 2020 early education and outreach. Líderes are drawing upon Teatro Campesino – popularized by the United Farm Workers in the 1960s – to counter immigrant fear and apprehension of the census. 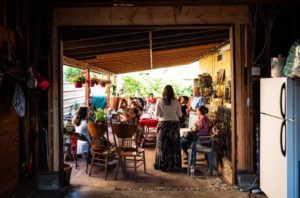 Communities for a New California (CNC) Education Fund is committed to building power by engaging and activating working people in the local communities by using the power of technology for organizing. CNC covers 13 rural counties across the San Joaquin, Central and Imperial valleys. CNC was founded in 2011 by a group, including founding Executive Director, Pablo Rodriguez, who previously served as the Director of the Dolores Huerta Community Organizing Institute. Pablo has prioritized building a strong team, with 10+ organizers on staff, they have one of the more robust community organizing programs in the valley. The senior team is made up largely of women of color. Over the years, this, along with implementing a leadership training program and mass voter engagement, has made it possible for them to engage two hundred thousand families and hold decision-makers accountable. 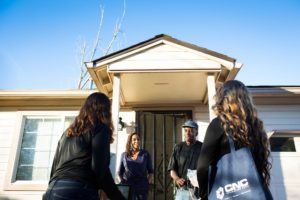 In the Central Valley, there are not many formal worker organizations; instead organizations operate across multiple issue areas, often due to lack of resources, prioritizing systemic change at the intersections of issues. CNC’s programs highlight: healthcare, 2020 census, immigrant rights, education, clean air and water, and parks for all. In other areas, CNC facilitates transparency between local agencies and the community.

CCRI, CVP, Líderes Campesinas, and CNC demonstrate the wealth of opportunity across the Central Valley – beyond the abundance of land and economics, vast with the possibilities for building coalitions. These leaders are making great strides for workers both in their region, and all workers in California.

We have only just begun to realize what is possible with grassroots groups working in and around issues related to workers and worker rights. While worker-related issues have received more attention in coastal areas, the greatest challenges lie among California’s inland areas, where racial and geographic inequalities are much greater.

For those of us in philanthropy who say we are committed to equity and justice, we must consider what it means to shed light and provide resources to disadvantaged regions like the Central Valley. We must adequately fund organizations and coalitions doing work akin to organizations in coastal areas that have successfully transformed their respective regions and improved workers’ lives with adequate funding and philanthropic support. The risk is simply too high to ignore the courageous and phenomenal leadership we know is creating live-saving change every day.

Andrea Prebys-Williams was a Program Manager focused on worker initiatives at Tides. She also teaches at Presidio Graduate School and consults on various projects at the community-building and policy-level.

Ana Padilla is Director for the Civic Capacity Research Initiative at the University of California, Merced.