Hank Williams was the director of Platform, a Tides project focused on increasing the interest, participation, and success of those underrepresented in the innovation economy — with a particular focus on connecting and increasing the numbers of Black, Latino and women tech innovators. Hank passed away on Sunday, November 15, 2015 at age 50. 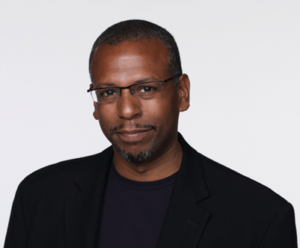 Henry “Hank” Williams was a tech entrepreneur and pioneer technologist, who described himself as an “odd ball” in Silicon Valley due to the lack of diversity. He began Platform with co-founders Jonathan Moll and Shahara Ahmad-Llewellyn. Platform became a project of Tides in November 2012.

Hank’s perspective was that “we need as a nation to create, not just consume.”  With an early partnership with MIT Media Lab, Platform launched the Platform Summit, which has now become an annual 2.5 day conference. This past October, Morehouse College and Georgia Tech cohosted the 2015 Platform Summit creating a stage for more than 600 participants to come together and tell their stories. It is a hub through which inspiration is joined with education, opportunity and resources.

Believing that images have the power to “change attitudes, lives and ultimately the world,” Platform curates videos featuring talks from the Summit. The videos highlight the extraordinary contributions and potential of inventors, entrepreneurs, creators and leaders from historically underrepresented groups and reach millions of viewers. The goal is to inspire the next generation and encourage a national dialogue about the importance of greater entrepreneurial diversity.

In the weeks since his passing, the stories shared by Hank’s family, friends and network make it clear that Hank profoundly and deeply touched the lives of thousands, and they intend to carry forward his important legacy by furthering Platform’s mission. At the request of Hank’s wife, Mayida Zaal, in lieu of flowers and gifts donations may be made in Hank’s honor to the newly formed Hank Williams Foundation and towards the educational fund for their three-year old daughter, Imani. Contributions may be addressed to: