WE LEAD (Women’s Environmental Leadership Fund) is a new fund launched by Tides with a goal to bring critical funding to women leaders in the environmental justice space. We had an enlightening conversation with members of WE LEAD’s Independent Advisory Committee, which is comprised of Farah Mahesri, Kimberly Middleton, Peter Martin, Shaune Zunzanyika, and Tuti Scott, where they shared important details about this exciting new fund.

Tell us more about the vision behind WE LEAD? Why now?

From its inception, Tides has provided catalytic capital to progressive social movements—and we’ve been an early funder of the climate and gender justice movements. Many of our philanthropic partners have been funding important organizations in each of these respective spaces for years, but to date, not many have viewed climate and gender as intersectional. It’s our hope that by bringing these two communities together now, when we need urgent climate action most, we can build momentum for achieving our climate and gender justice objectives by investing in brilliant, savvy, and courageous women leaders.

How is WE LEAD different from other climate-focused funds or movements?

First, we are focusing our funding on frontline women leaders. They are the unsung and most under-resourced heroes of the climate movement. Second, while we care about short term policy outcomes, our fund is focused on building the long term public and political will for systemic change. Furthermore, we prioritize unrestricted, multi-year funding, and, therefore, we look beyond short term and restricted funding cycles to invest in women leaders who can build the lasting and holistic change our society needs.

Despite gender empowerment and gender equality being buzzwords in the philanthropy space, only 1.6% of funding goes toward work that supports women and girls.

We want to add that there are several other gender / climate funds out there that focus on equity and justice. We applaud them and their approach, and we look forward to partnering to bring additional resources and mind power to the table.

What types of women does WE LEAD focus on, and why?

We say we focus on women not because of a particular focus on a gender identity, but more symbolically to capture what this fund is meant to do: invest in leaders who are leading frontline, effective, transformative fights and who have historically been overlooked by philanthropy. This includes people who identify as women, as we know that women-led organizations are under-funded in every sector. For example, only 2% of VC funding goes to women-led start-ups. And, despite gender empowerment and gender equality being buzzwords in the philanthropy space, only 1.6% of funding goes toward work that supports women and girls. In fact, 90% of all environment-focused organizations in the United States—90%!—are led by white men. 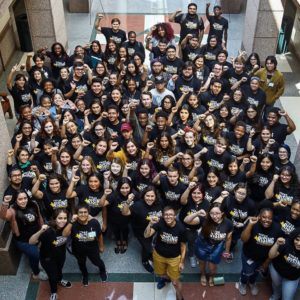 We are focused specifically on Black women, women of color, and indigenous women who are on the frontlines in the fight against environmental racism, and whose contributions in the fight for environmental justice are often overlooked and underfunded. Within the U.S., race is still more effective than income in predicting the distribution of pollution and placement of polluting facilities or sites. Recent census data shows us that minorities are overrepresented in populations that live within a three mile radius of identified Superfund Remedial sites, a majority of which are located in economically distressed communities. These unseen, unheard, and underfunded women leaders are fighting for populations, communities, and neighborhoods that are deeply and personally impacted by climate change and structural racism.

Through WE LEAD, we are also focused on women from outside of the traditional environmental movement, such as labor or human rights advocates, who bring forward an intersectional approach to climate change. These women leaders are pushing the traditional environmental movement to recognize and acknowledge that the climate challenges/problems we face are rooted in varying types of systemic oppression.

This is how we fix our democracy—by bringing more voices to the table, elevating the issues that matter to millions of people, not just the few who can afford lobbyists.

And none of this accounts for leaders who are non-binary or gender queer for the simple fact that we don’t even have enough data about organizations led by leaders across the gender spectrum to make an assessment. Essentially, we want to fund those who are under-represented and haven’t had a chance yet to test their ideas and have their voices heard! We believe that these underrepresented leaders have the right to be heard, to be seen, to try out new ideas—and to fail—just as much as organizations led by those in the majority.

What does WE LEAD hope to accomplish, and by when?

Through strategic funding over the next 5 years, WE LEAD hopes to sustain, grow, and develop women’s frontline climate justice leadership by creating a platform for women’s leadership to thrive, and by fostering lasting change on the climate landscape. By shifting power, business, and funding as usual, WE LEAD will open the field to new ideas and approaches that when funded, can breathe new life and momentum into the climate justice movement. By promoting a new wave of organizations and communities building a powerful, cross-sectoral coalition advocating for climate justice from a position of solidarity, gender justice and an intersectional analysis, through WE LEAD, we will drive the philanthropic sector to do better, be bolder, and become more daring in how we as a sector fund climate justice. Together, we will mobilize resources to change daunting statistics, and to fortify social justice organizations and initiatives founded on equality and human rights, a sustainable environment, and healthy individuals and communities.

Why the focus on different—and specific—geographic locations in the U.S.?

Based on current and projected emissions levels, there are several hotspots in the US that have or will have an outsized impact on the U.S.’s ability to respond to the climate crisis, including the Ohio River Valley and Texas. We want to focus on these critical areas. Fortunately, there are incredibly brilliant and courageous women leaders in the climate space in these regions who are already fighting for the safety and health of their communities—and who are making real change. While we must be clear-eyed when deciding where our resources can have the most meaningful impact, for now, at least, that means focusing our funding on targeted, hugely consequential, geographies. Moving forward we will strategically expand our work and geographic scope as we listen to, engage with, and continue to learn from frontline activists, funders, and other experts monitoring developments in the battle to contain carbon emissions.

How, exactly, is WE LEAD creating a new wave of cross-sectional collaboration to fight climate change?

WE LEAD isn’t just an environment or climate change fund. It’s a climate justice fund. It’s about looking at holistic, systemic, sustainable solutions that are good for the planet and good for our communities. We aren’t talking about simply cleaning up oil spills after they happen, WE LEAD is about not building the oil pipelines in the first place. It’s not just that we’ll have stopped fracking in our communities, but rather that we won’t need fracking technology to keep down costs for fossil fuels because we will be using clean energy. Healthcare costs—and the costs associated with missed days of work from being sick or caring for sick loved ones—will decrease  because we won’t be poisoning our children with industrial runoff. We want a world where we aren’t just fixing environmental problems as we create them—this is inefficient and leads to an endless game of whack-a-mole. 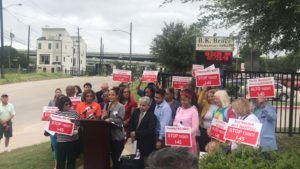 Dr. Bakeyah Nelson, Executive Director of Air Alliance Houston, addresses the crowd protesting the expansion of the 1-45 freeway, which would have adverse impacts on local low income communities. She’s one of the leaders on the frontlines that WE LEAD is supporting. Photo by Air Alliance Houston

Through it all, we are committed to making our democracy and economy healthier. We’re collaborating with people who are not traditional power brokers in our current system, and as they build power within their communities, they will use that power to advocate for other issues that touch their community and beyond.

For example, in our first batch of grantees, we have two organizations—a youth group and a Latinx group—that have for years worked on other social justice issues and are now coming to us because they want to start a climate aspect to their work. Their communities see the impact of climate change on their health, on their well-being, and on their livelihoods. These groups are also leading the fight on other issues like voter engagement and leadership development, especially for young people of color. This is how we fix our democracy—by bringing more voices to the table, elevating the issues that matter to millions of people, not just the few who can afford lobbyists. As the feminist green new deal principles states, “Reject false and harmful responses to climate change that fail to address root causes.”

What are the top funding priorities of WE LEAD?

WE LEAD support will be directed toward the growth and sustainability of women’s frontline climate justice leadership and community driven solutions that center on equity, power building, and movement organizing. Those women who address structural and systems change, who are intersectional in their analysis and approach, will be prioritized.

We aren’t talking about simply cleaning up oil spills after they happen, WE LEAD is about not building the oil pipelines in the first place.

It has become blatantly clear during the COVID-19 crisis, for example, that structural inequities and racial discriminations are determinants for negative health outcomes and disproportionate mortality rates. While the official data is forthcoming, we understand that already stressed and vulnerable under-resourced communities of color, who have been exposed to toxins and pollutants in their air, soil, and water, leave people more susceptible to the virus and further marginalized. WE LEAD support aims to shift resources to these impacted communities to confront systemic environmental racism and to both sustain existing leaders and grow new local grassroots leadership. We hope to fortify their organization’s ability to mobilize people and transform policies that limit harm and address public health and socioeconomic outcomes related to climate disruption.

Who is eligible for this fund? How do they learn more?

WE LEAD funding will go toward organizations and projects led by queer, trans, non-binary, and cis women, particularly Black women, women of color and indigenous women climate justice leaders who have been systematically excluded from access to philanthropic resources.

WE LEAD also hopes to support the ecosystem of women-led organizations and initiatives outside of the traditional environmental movement who, when faced with the impacts of climate disruption, have taken it upon themselves to look for sustainable community-driven solutions. We also have the flexibility to fund non 501(c)(3)s, including funding the charitable activities of 501(c)(4)s and other types of social enterprises.

In the coming months, WE LEAD will collaborate with our anchor funding partner in Texas, The Hive Fund for Climate and Gender Justice, to host an online event highlighting the work of grantee partners that include Air Alliance Houston, Texas Rising, and Jolt Initiative. To receive an invitation to this event and learn more about ways that funders can support work for climate, gender, and racial justice, send an email to [email protected] and sign up for the Hive Fund newsletter at HiveFund.org/news. 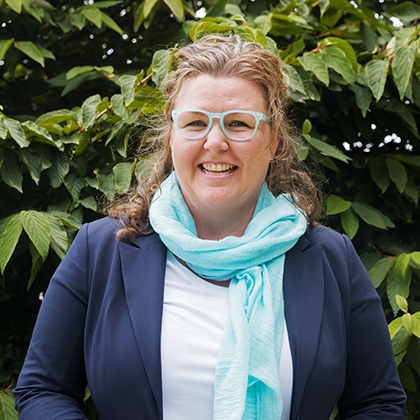 Kimberly manages a diverse client portfolio that includes private foundations, donor advised funds, and fiscally sponsored social ventures. In her role as an advisor, Kimberly collaborates with innovative partners and provides comprehensive solutions related to domestic and international grantmaking, capacity building, operations, and events. Her interests are in the areas of advancing equity for women and girls, human rights, and indigenous communities. Prior to Tides, Kimberly served as program officer in the International Women’s Program at Open Society Foundation.