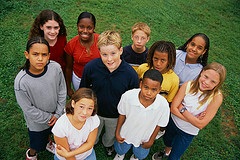 Historian Carter G. Woodson started Negro History Week in 1926 to educate the American people about African-American history and to promote that history as a more significant part of American history as a whole.  Despite his original intentions and the federal expansion of the week into a month, critics rightly argue that African Americans and other people of color are still viewed as the exception to the majority white rule, and that this marginalization continues to be pervasive and at the detriment to economic and social mobilization.  We must fully embrace that this “exception” of race is the rule—as data shows—and more justly distribute resources and elevate opportunities to pursue true equity.

Numbers and projections show that people of color are fast becoming the new majority in the United States; 43.9% of the population is non-white or Latino. Asians and Latinos experienced the highest rates of population growth between 2000 and 2010 (43.3% and 43.0%, respectively), and people of color are set to become the majority of the US population by mid-century, following a trend already seen in California and New Mexico.  Blacks, specifically, are 13.6% of the population and saw 15.4% growth in ten years, behind Asians and Latinos but still outpacing general population growth of 9.7%.

However, resource distribution is vastly disproportionate, as reflected in the philanthropic sector.  Programs focused on ethnic and racial minorities receive only 10% of grant dollars: 6% targeted ethnic and racial minorities generally, 2% specifically African Americans, 1% Latinos, and less than 1% targeted Asian and Native Americans.  Additionally, people of color comprise only 7.5% of foundation CEOs/Presidents, 12% of executive staff, and 13.5% of board members/trustees, with African Americans being 3%, 4% and 7%, respectively.  The only area in which foundations better reflect the general population, in terms of people of color is among program officers—34% overall and 17% African American—who tend to have less decision-making power on overall budgets and organizational directions than levels of leadership with less representation.  Lastly, there are significantly fewer foundations based in the South, where the highest concentrations of Black populations live.

We also need to expand our definition and thinking of Blackness beyond the borders of the United States and Africa.  Although the concept of the African diaspora is not new, corresponding resource mobilization strategies are still unexplored and underutilized.  There both is a long history of forced and voluntary migration from Africa to other continents and an urgency to act as we continue to globalize, experience unprecedented rates and numbers of population shifts (e.g., conflict and climate change refugees), and understand how race dynamics play out in dangerously parallel ways from culture to culture.

For instance, Afro-Latinos—Africa -descendent populations in the Spanish- and Portuguese-speaking nations of Latin America—make up over a quarter of the region’s total population (150 million of 540 million), and are among the poorest, most marginalized groups in the region.  They are 45% of the population of Brazil (which has the largest Afro-Latino population in the region), but 64% of the poor and 69% of the extremely poor.  Additionally, only 18% have completed secondary school (compared to 38% of whites), and they earn 44% less than non-Blacks.  One study has also found that violence is becoming the leading cause of death for Afro-Brazilian men.

Tides is committed to addressing these issues by building Black donor engagement and increasing our support to Black communities in the United States and globally.  Racial equity is fundamental and central to our mission, not considered a special initiative or specific to a narrow population.  We are developing systems and vehicles that democratize philanthropy and leadership in the truest sense—by supporting the growth and retention of local assets in racial and ethnic minority communities around the world. “21CF powered by Tides” is a significant step towards bringing racial justice firmly into the core work of Tides and giving a mandate of elevating community-of-color-focused work to the social change sector.  We look forward to sharing our upcoming work throughout the month.

Melissa L. Bradley is the CEO of Tides.