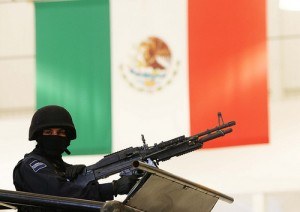 Lunch  at the hotel was over a discussion of  human rights and drug policy reform.  The group included a few local opinion leaders, the head of a physicians groups advocating harm reduction, a former congressman.
We discussed the possibility of holding a conference. The summit would bring to Juarez groups from both sides of the border to discuss the key issue areas that could address the violence, support non-profit infrastructure in the region and provide a forum for a progressive bi-national debate about the drug war.

Border hawks on the American right want to build a fence high and long enough to keep Mexico’s troubles on the southern  side.  All of the evidence to date suggests that such a wall can’t exist in an open society, that a 20 foot wall will be overcome by a 22 foot ladder.  At the same time, Americans are profiting from the export of guns and ammunition to Mexico.  And our demand for the drugs made in or transshipped through Mexico is the principal driver of the whole
disaster.

But even the most open minded American liberals don’t know what to say about the Mexican drug war – so they don’t say much.  Progressives are understandably focused on immigration reform as a means to help Mexico’s poor as they arrive here.  But the plight of Mexico’s poor is caused by more than immigration injustice and it will be hard to get comprehensive immigration reform with the body count mounting across the river. Immigration from Mexico can only be controlled by making life more tolerable in Mexico.

Ted Lewis has been coordinating  Mexico-focused US organizations and their Mexican counterparts  in a series of conference calls  to articulate progressive US-Mexico  policy alternatives in three key issue areas:  gun policy, drug policy and security policy. These kinds of broad multi-themed debates,  with  a social justice frame, don’t happen as much as they  need to.

The large staff of Centro de Derechos Humanos Paso del Norte joined us in  the small meeting room,  and we all negotiated ourselves into a crowded circle.  Though they function in a secular capacity,  the Executive Director is a priest and many of the activists are  nuns. They are the most established human rights organization in the region, the advocates  of first and last resort. They follow the cases of the threatened, the dead and the disappeared, as the paperwork moves slowly, ineffectually through the system. They accompany the families to the government offices, the police station or to court. They give solace, legal advice and prayers. They join in marches, help to broker inter-organizational agreements. They are incredible.

We watched their Power Point, and asked, as good funders will,  about their projects and plans. Then they asked us what we thought of them. We told them Juarez was  la punta de la lanza – the tip of the spear – in Mexico’s struggle for justice, democracy and security. We told them they were heirs to  the great historical social  movements of Mexico -indigenous movements, campesino movements, student movements – traditions of resistance  that have made  the country great. We told them we would  give them a grant.

There was a feeling  I couldn’t shake, so I spoke up. I have a friend dying of cancer, I told them. She is coping bravely but the cancer is winning.  That is how I feel here. Mexico’s human rights infrastructure, which on its best day has a hard time  protecting  people from the excesses of the state,  can do little against these omnipotent adversaries. Even simple  things are hard, and hard things seem impossible. As critical as the human rights defense work  at Paso del
Norte is, and it is critical in a place of such broken government, they are giving  important but palliative care.

This was the feeling  I couldn’t shake: the cancer is winning. They didn’t disagree.

The Journalists of El Diario and Red Periodistas a Pie

Dinner with a few of the women journalists of El Diario, the city’s largest newspaper,  was a revelation. No, they are not able to cover any news in the cartel controlled Centro Sur area. No, their news bureaus do not protect them, nor does the army, nor the police. No, they can’t publish but a fraction of what they learn.

They arrive at still hot crime scenes armed with pens and notebooks.  They record the facts and do the  interviews with mortal hazards all around them. They buried two from their newsroom in the past year.  Throughout the country more than a hundred  journalists are either dead or disappeared.  Every lead, every source, every story is a roll of the dice.

Red de Periodistas a Pie – Network  of Frontline Journalists on Foot – helps  reporters throughout Mexico who risk death to tell  the most important story of their lives. They have been giving workshops on a range of topics from security to reporting strategies. They are investigating the use of new media and monitoring the deteriorating health of the traditional Mexican press.

Periodistas a Pie, in collaboration with the reporters of El Diario, will  formulate  Juarez- specific  strategies to improve the drug war reporting, to design security protocols, to build shared knowledge and capacity.  They are organizing to better negotiate with media bosses who are frequently part of the problem,  and to assess and monitor the threat of the  street thugs who menace them.  For now, Angelica Foundation is their only funder, the only money at the table.

This is the clincher:  In Juarez the journalists  feel lucky.  The press is still relatively dynamic there, news is getting out. They watch with horror as newsrooms effectively  go dark in the  states around them. They call these places  Zones of Silence, states including Tamaulipas, Nuevo Leon  and Coahuilla.  There is some very brave independent reporting in those zones, even now. Mostly though, what passes for  news is sometimes  produced by the narco-periodistas  (narco-journalists) themselves – part of the cartels’ robust media strategy. What fills the rest of the news cycle  is  irrelevant,  trivial or  ludicrous. Mexico’s press just slipped in its Freedom House  ranking to become, for the first time, ranked as “not free”.

The journalists of Juarez could have told you that was coming a long time ago.

The next morning, we visited the working class neighborhood of Villas de Salvacar, a neighborhood marked by abandonment.  Homes abandoned by those who have lost their jobs or fear the violence,  people abandoned by their own government.  Villas had a brief moment of international notoriety when gunmen burst in on a teenagers birthday party.

Eleven of the sixteen young people that were gunned down at that birthday party in the community of Villas de Salvacar  were teenagers, and probably none of them were the ones the sicarios (cartel enforcers) were looking for. They killed them anyway. Among the many victims of the Mexican drug war violence, it is the young men who are the most targeted and who die and go to prison in the greatest numbers.

The ones who resist the easy money and quick prestige of the Plaza live caught between those who don’t resist it and the authorities who must appear to pursue them. Daily life for a Juarez youth is a struggle to find work,  food, transportation and  school. It is also a struggle to avoid gang shootings  and random police shake-downs.

Unemployed, under-parented and marginalized in every possible way, the poor young men of Juarez are the first to be harvested to work for criminal organizations, and the first to be killed or given over to the police to boost arrest numbers.  With few options left to them, and the money to be made irresistible, many cross over: “Mejor vivir  cinco anos como rey, que cinquenta como pendejo,” is a saying that translates like this: “Better to live five years as a king than fifty as an idiot.”

After what they call el massacre ( the massacre), the young people of Villas de Salvacar  organized. This is what they asked of their government:  A park. They wanted  a park for the community to use, for sports to take the place of crime, for the unsightly scrub in the center of their community  to become a green demilitarized space for the families of Villas.

This is what the  Municipal Government gave them: A huge sports complex in the middle of all of the abandoned  and decaying houses of Villas, with American football fields, soccer field, baseball diamond, basketball courts.  They then fenced the  impressive complex off (except for a small corner designated for community use) and mandated it only for use by the city’s leagues. The youth of Villas now can look through chain link at their park, the park they are not allowed to play in.

The Villas youth formalized an  organization, and seeks support for programs and community building projects.  Their rhetoric is tinged with benign socialist  jargon from earlier campesino movements. The youth have been organizing around community security issues, have protested the military’s presence in their city, are arranging conferences and neighborhood events. They took over two abandoned houses, turning one into a cultural center and the other into a library, homework center and outdoor cinema.

The library is a modest house facing the park that, at the rate they are going, will be under renovation for the rest of time.  Computers and a small children’s reading room are on the ground floor. The rooms on the upper floor house the books for the older youth – books just then coming out of donation boxes and onto rickety shelves.  The collection is impressive and includes works by Cervantes and  Garcia Marquez, books about science, math and technology.  On one prominent shelf sit, side by side,   the Mexican constitution and a copy of Kafka’s Metamorphosis. Judging by their well-worn condition, the youth of Villas de Salvacar are reading both.

We stood in the border line that snakes over a pedestrian bridge joining  Juarez and El Paso,  a chain link arc over the Rio Grande.  The descendants of conquistadors and pyramid builders cooled their heels in line beside the  American nationals waiting to show blue passports.  It has always been an interesting and dicey place, this border we share.

Today and tomorrow Ciudad Juarez is a place where angels and devils meet in an epic battle for the real future of Mexico and, by extension, the moral future of  its northern neighbor.  Can philanthropy find its place here and do some good? Despite the difficulties, we  insist that it can. More powerful forces than philanthropy will need to mobilize to stem the violence and renew Mexico.  In the meantime, we hope other funders will join us to support  the human rights defenders, emerging leaders, youth organizers, and  journalists. We will convene meetings and push debates. We will celebrate that there are still a few problems that money can solve.

As a donor who has loved Mexico and fought for its better angels all of her career, it is too easy to succumb to a broken heart in Juarez. Instead, I consider it my fortune, mi fortuna, that I have eyes that can still see the bravery and heart in the fight for Mexico.