On September 21, 2014, my son, Robby Poblete, was shot and killed in broad daylight at a busy intersection in Vallejo, California. He was 23-years old. For two years following his murder, I could not return to Vallejo, a city that I had called home for most of my life. That’s what gun violence does: It robs us of our sense of community, our belief in humanity, our sense of hope. And for mothers everywhere, it has robbed us of our children.

I had to find a way to transform my pain into purpose.

In the depths of my grief, I could barely muster the will to get out of bed. My PTSD prevented me from carrying out the most mundane tasks of everyday life: going out to get the mail, walking through a grocery store, feeling a loved one’s heartbeat as I hugged them—all prompted panic attacks. I never realized how prevalent guns were in our culture until I could no longer watch TV or go to the movies out of fear that an unexpected gun scene would pop up in a trailer or commercial. I stopped visiting with my nephew because his favorite game was running around with toy guns and water pistols.

And so I had to learn to live again, how to consciously inhale and exhale, how to put one foot in front of the other, and how to put food in my body simply to function.

But most of all, I had to find a way to transform my pain into purpose.

In 2017, I created the Robby Poblete Foundation, a 501(c)(3) nonprofit organization (not associated with Tides), with the goal of reducing gun violence and creating career pathways. I created three intersecting programs: Gun Buyback, getting as many unwanted weapons out of circulation as possible; Art of Peace, working with artists to transform the dismantled weapons into inspiring art; and Work in Progress, working with the reentry population and individuals from often marginalized communities to obtain lifelong job skills and living wages in the trades.

When I launched the foundation, my hope was to help create safer communities in the city where my son was killed. Year over year, Vallejo has been home to more than half the gun-related homicides in Solano County. If the nonprofit was successful in holding a gun buyback, my goal was to then launch the Art of Peace program. And if we were able to get some support, I thought perhaps we could also pilot our vocational program.

That was my hope.

As of the writing of this blog, nearly 1,500 weapons have been surrendered through our gun buybacks in Solano County, Contra Costa County, San Francisco, and even Augusta, Georgia, many of which were assault weapons. Thousands of firearms that have been confiscated in crimes, adjudicated, and dismantled have been sent to us from around the country to be transformed into art. We have held Art of Peace exhibits in Vallejo, Oakland, San Francisco, Richmond, and Augusta, Georgia, forever transforming weapons into art. And we have distributed more than $30,000 in apprenticeship scholarships, helping numerous people without shelter transition into good paying jobs and permanent housing solutions. 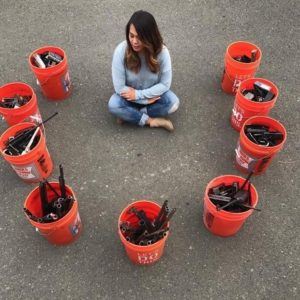 In a country where there are 100 gun-related deaths every single day—an epidemic that disproportionately impacts communities of color—it can seem overwhelming.  But I have also learned not to underestimate the power of one.

I could not have started any of this were I not a mother—to a son whose life I honor every day and to a daughter whose life has been forever altered.

A mother wanting to make a difference in the name of her child is unstoppable.

I know because I am one of them.

In honor of Mother’s Day, Tides would like to showcase the following organizations led by mom activists: LINK Houston, led by Oni Blair, advocates for a robust and equitable transportation network so all people can reach opportunity. Jolt Initiative, led by Gloria Gonzales-Dholakia, increases the civic participation of Latinos to build a stronger democracy and ensure everyone’s voice is heard. Both organizations are grantees of Tides Foundation’s WE LEAD Fund. We asked both mothers to share what compelled them as mothers to take on their advocacy. 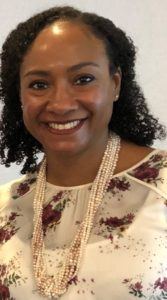 Oni Blair
My parents sacrificed so much so that my siblings and I could have great experiences, especially in education. That sacrifice came at a cost: My parents were very clear that they couldn’t buy a car for me. The money I earned from babysitting and other odd jobs went to support school trips or other special experiences. I didn’t have money for a car, so I learned to get to classes, internships, out with friends, and eventually a job by any other means. Now, my own family of five shares one car to cut our transportation cost and our carbon footprint.  I want my kids to know that our family will do our part to limit our impact on the environment; enjoy healthy experiences walking, biking, and using the bus; and save extra dollars for fun memories of our own. I also want my children to be independent by knowing that they can get to school, the park, and even the zoo by a variety of different transportation means. I want nothing, including a ride, to stop them from reaching their dreams. 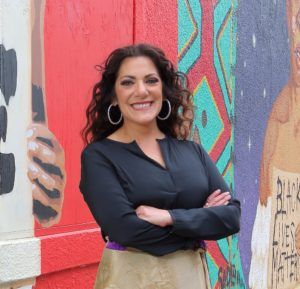 Gloria Gonzales-Dholakia
I didn’t always know the value or power of my voice, but I was fortunate to be surrounded by family, teachers, and organizations that believed in me before I believed in myself. I’m a first-generation college student and a Latina, and I owe so much to one special teacher who introduced me to a world where people who look and sound like me have a voice. During my journey, I often entered and endured spaces that didn’t want to make room for me. It was lonely and difficult at times, but I persisted, and it led me to the exact place where I know I’m supposed to be—leading Jolt, the largest Latino civic organization in Texas. My mission now is to support and uplift the voices of marginalized communities and empower them to make spaces for themselves in areas where they haven’t been before, like I did.  I am called to do this work for not only my three children but for all the young people in Texas, regardless of where you come from, the color of your skin, or the language you speak at home.  Amplifying their stories is critical for a better world and a stronger democracy..

Ahead of Critical Midterms, Grassroots Leaders Safeguard Against Disinformation and Voter Suppression