As executive director of Take Action Minnesota, Elianne Farhat works tirelessly to support communities of color to vote and stand up for their interests. An important focus in her work: activating more Black, Indigenous, and People of Color (BIPOC) women to follow her path to political and community engagement and leadership. 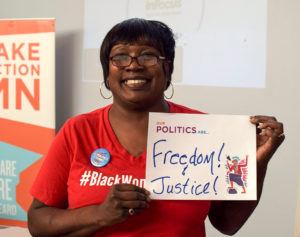 “We need to help women see they have value and worth, and they can make the difference when it comes to who gets elected and what government does to and for our communities,” said Farhat, the proud daughter of an immigrant father from Lebanon and a mother of Lakota (Standing Rock) descent.

This year marks the 100th anniversary of the 19th Amendment to the U.S. Constitution. Yet the truth is the struggle for equal voting rights for women continues well after the amendment became law. Indeed, groups like Take Action Minnesota, a Tides Healthy Democracy Fund grantee, are still struggling—heroically and passionately—to ensure that women, and particularly women of color, are able to fully and freely exercise their right to vote.

As we look ahead to a momentous November election, it’s heartening to reflect on the fact that the last few years have been a watershed for women’s political power. A female major-party candidate for president. Historic gains for women of color and LGBTQ women in Congress. Now, a woman of color nominated by a major party as vice president. Not to mention countless women newly elected to state and local offices.

People think it’s white moderate and conservative voters who decide elections, but that’s not based in fact. And it ignores the reality that women of color are the fastest-growing voter bloc in the country.

The rise of these women leaders is due in large part to growing rates of political and electoral participation by women of color, and especially Black women. It’s also due to the hard work of women-led organizations like Ignite, VoteRunLead, and ReflectUs.

Today, one in three voting-age women in the United States are women of color. Yet, women of color still vote at lower rates than white women. And while the turnout gap between white and Black women narrowed to three percentage points in the 2016 presidential election, among other women of color, it is much wider. For example, turnout among Latinas is consistently 14 to 20 percent lower than the comparable number for non-Hispanic white and Black women.

Aimee Allison is founder and president of She the People, a Healthy Democracy Fund grantee working to mobilize women of color to vote. She said one reason for the gap in turnout for women of color is that political and issue campaigns tend to ignore them. “People think it’s white moderate and conservative voters who decide elections, but that’s not based in fact. And it ignores the reality that women of color are the fastest-growing voter bloc in the country,” Allison said.

Among the other reasons for the turnout gap for women of color and their communities is that they face persistent and discriminatory barriers to voting. These include onerous voter ID laws, racist “purges” of voter lists, targeted polling place closures in communities of color, and blatant campaigns of fear and intimidation against immigrant voters. 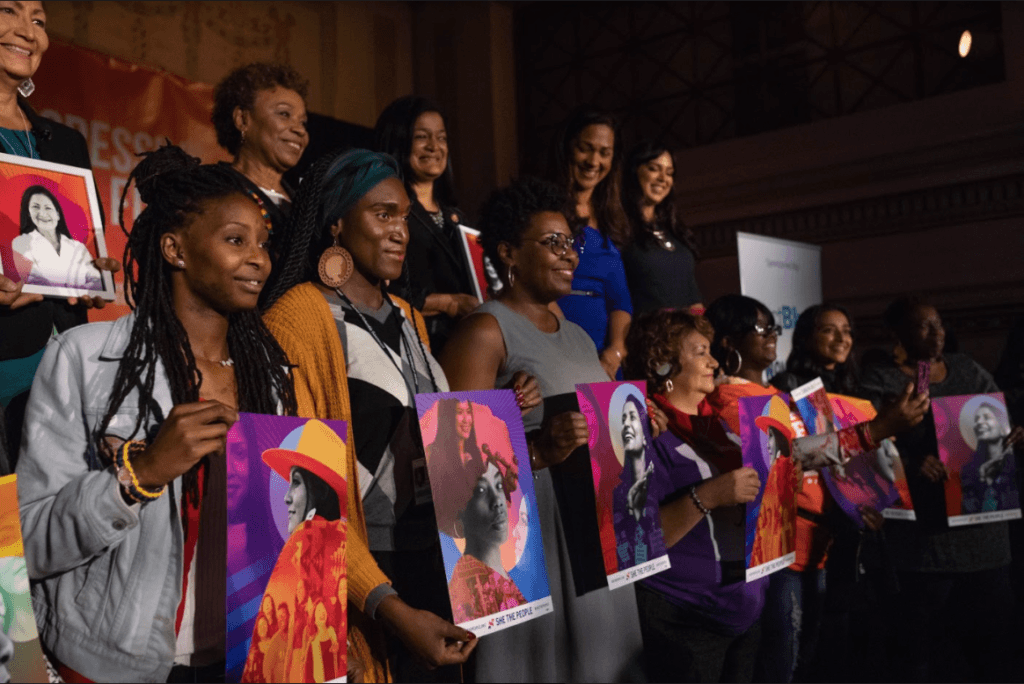 A powerful group of women—including congresswomen and representatives from Transgender Law Center, We Act for Environmental Justice, Service Employees International Union, and KC Tenants—take the stage at a She the People event, mobilizing other women of color to vote. © She the People

Kendra Kloster is executive director of the Native Peoples Action Community Fund, a Healthy Democracy Fund grantee working in Alaska. She said polling place closures have been an especially problematic barrier to voting for Indigenous communities in the state. In one of the more blatant recent examples, election officials announced the closure of six polling locations in remote Alaskan communities just 12 hours before polls were supposed to open for the state’s primary election in August.

“It is constant work fighting the barriers to voting that come up all the time for our communities,” said Kloster. “And when you add to everything else the lack of trust in government in Indigenous communities because of our history, we have to be very thoughtful and strategic about meeting people where they are and helping them see the power of the vote.”

For the Native Peoples Action Community Fund and similar groups, mobilizing women of color to be more politically and civically engaged is about building community. Kloster said her organization holds gatherings of Indigenous women every month (lately via Zoom) where the main activities are beading, sewing, and storytelling. “We don’t make it about specific issues,” Kloster said. “We just want to create space where people feel connected.”

Instead of parachuting in with one-time election-year grants every two or four years, this work has to be supported year in and year out.

At Take Action Minnesota, the work of building connections with and among women of color falls in part on 50 women of color organizers across the state who are mobilizing their peers and engaging them in conversations about their hopes and dreams for their families and communities.

In yet another effort to support women of color to connect in ways that will deepen their relationships and political engagement, a number of Latina leaders have launched She Se Puede, a digital lifestyle community that will combine content and conversations on everything from parenting and food with information on voting and politics.

“Part of this work is about giving Latinas opportunities to grow in their self-awareness and confidence and to see how they can help transform the country,” said She Se Puede Co-founder Stephanie Valencia.

Those who are engaged in the work of mobilizing women of color voters say funders need to start thinking differently about elections and getting out the vote. Instead of parachuting in with one-time election-year grants every two or four years, this work has to be supported year in and year out. 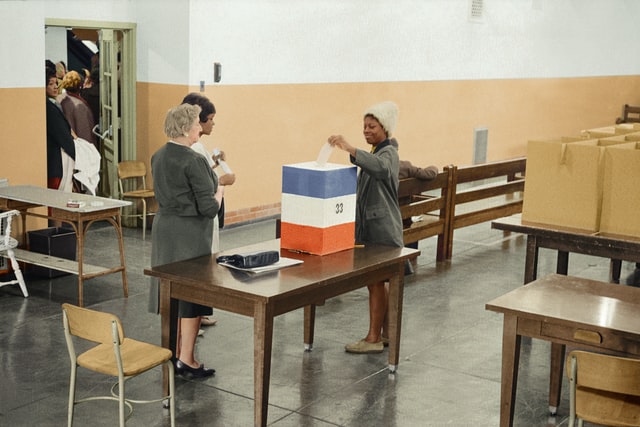 If you are an individual, foundation, or corporate donor, please consider joining Tides in supporting this work by contributing on an ongoing basis to the Healthy Democracy Fund. The Fund supports many organizations led by women of color at the forefront of building a more inclusive democracy that works for all of us. Also, reflect on your giving. Join our donor convenings and learn how donors are aligning to help grow the power and voice of BIPOC women.

“If over time we can build relationships and community and uphold the basic humanity of people, that’s going to result in long-term shifts in participation and turnout,” said She the People’s Aimee Allison. “And that’s going to lead to the day when we are finally led and guided by people who are closest to the problems and who know exactly what needs to change.” 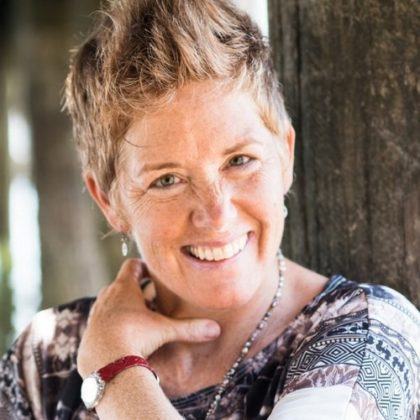 Tuti B. Scott has been the Interim CEO at Tides since August 2019. Tuti is a consultant for strategic philanthropy and a coach to high-achieving leaders. Known as the “Chief Inspiration Officer” of the women’s funding movement, Tuti has been a leader in social justice philanthropy, women’s rights, and women’s sports for more than three decades. Tuti currently serves as Chair of the Board of Directors of Tides and a founding Board member of the Women Win Foundation, and is proud to call herself an intersectional feminist and philanthropist. 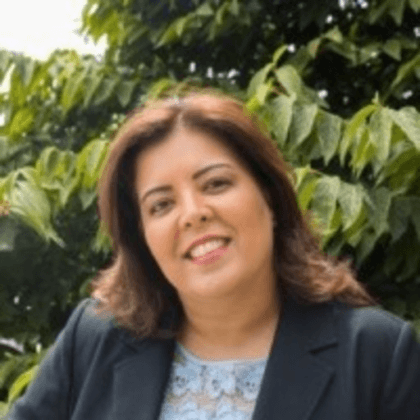 Alex Rojas [she/her/ella] is a Senior Philanthropic Advisor at Tides. A proud immigrant from the Dominican Republic, she has demonstrated passionate leadership in creating strategic investments for community-led solutions over her almost 30-year career. Alex is an accomplished professional in the areas of immigration, nonprofit administration, and civic participation. She currently serves as Program Manager of the Healthy Democracy Fund at Tides – helping to close the voter turnout gap in BIPOC communities and create momentum for stronger pro-voter policies. Prior to joining Tides, Alex was a director with the Twenty-First Century Foundation (21CF), a national Black-led public foundation, and she also co-founded Youth Unlimited, a New York City leadership program.